Mona Laczo writes about the logistics of the emergency aid programme in Banda Aceh, Indonesia.

END_OF_DOCUMENT_TOKEN_TO_BE_REPLACED

In the Lion Brewery in the Sri Lankan capital Columbo, the production of beer has stopped and the plant has been bottling drinking water to be shipped to the affected areas and distributed by Oxfam. Bottled water is important because water tanks cannot be delivered to some areas because bridges have been destroyed.

END_OF_DOCUMENT_TOKEN_TO_BE_REPLACED 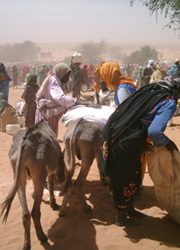 Owning livestock in Chad and Sudan is similar to having a savings account: you start it with a small amount, see it grow and use it only when things are getting bad.

For Darfurians seeking refuge in Chad, that is exactly what has happened. Many of them owned good herds of camels, horses, cows, sheep, goats and donkeys – up to 400 to 500 animals for a rich family and around 50 for a poor one.

Now, they have lost most of them because the animals were either killed or stolen, or died of disease and tiredness during their long flight from Sudan. There are no more that six or seven animals left per family on average. Things are really bad.

“We’ve counted more than 64,000 animals dead since the arrival of the refugees in Eastern Chad”, explains Zita Crener, Programme Manager for this emergency with Oxfam’s Spanish affiliate – Intermon Oxfam – who are running this part of Oxfam International’s response.

“Since mid-September we’ve been vaccinating animals to stop them dying. They are the livelihood of many refugees and also of a great deal of the local host population, which is going through many difficulties since the arrival of the refugees”.

These animals are also the only source of nutritious food people have if they want to eat something other than plain rice or millet.

“I just sell my cows and sheep when I need some money”, says Abokara Wadi. He is a quiet man, quite old and very thin. For him, cattle are not a business but a form of life insurance. He lives in Barde, a village close to Breidjing, the most overcrowded refugee camp in Chad.

Until last year, barely 3,000 people used to live in this area. Now, local people have to share grazing land, water and firewood with 45,000 refugees. And there is little to go round in this semi-desert region, one of the poorest places in the world.

“The first few days we treated 20 animals that were quite sick, and they survived. That made refugees more confident… “

Intermon Oxfam’s vaccination programme is one of the few efforts that take into account both the emergency needs of refugees and those of the Chadian people that host them. 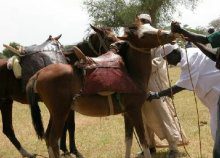 In this first phase of the programme, lasting until November, the objective is to provide 150,000 vaccines for pasteurellosis, anthrax and clostridium, three diseases with very high fatality rates.

Many of the animals must been treated with antibiotics first because they are in such a bad condition that they would simply not survive vaccination.

It was hard for vets to get refugees to trust them. Only 150 doses were injected the first day of vaccinations in Breidjing. The second day was a total failure, as rumours spread in the camp that we were trying to poison the animals.

“After two weeks, we became more successful. The first few days we treated 20 animals that were quite sick, and they survived. That made refugees more confident, so that now not just men but also women are bringing their livestock to us”, says Mahadi Bourma, one of the Chadian Ministry vets working with Intermon Oxfam.

They’ve already delivered 8,080 vaccines, most of them to animals belonging to people from the host communities. They haven’t had free vaccinations for the past three to four years, and the people can’t possibly afford to pay.

In the camps further north, refugees have been more ready to accept vaccinations. More than 32,000 vaccines have been delivered in two weeks, surpassing all expectations. Oscar Samso, the vet in charge of the programme in this area is excited.

“At Iriba, refugees and the local population organised themselves very well, and they agreed even on the schedule for vaccination. Nevertheless, communication is very difficult. They won’t tell us the number of animals they own as they fear that if they confess owning 20 sheep, for instance, they won’t get any other aid”.

It is quite clear, anyway, that both the Chadian government and aid agencies are very interested in this programme. “We are going to increase the number of vaccinations in Breidjing and Treguine, and we are beginning vaccinations at Amnabak, in the northern part of the Chad-Sudan border. We will be delivering 50,000 more doses”, explains Crener.

The Chadian Ministry of Livestock has also asked Intermon Oxfam to extend the vaccination programme to the areas that host refugees in the south, and to build slaughter-houses in order to guarantee proper hygienic conditions for animals killed for human consumption.

Local authorities are pleased. “Before, all aid was aimed to the refugees, but we also have problems because camps were placed on our working lands. If you don’t help us, we will be like refugees in our own country in a year’s time”, says Amine Ali Fort-Lamy, the regional sous prefect, the highest authority in this land. He is absolutely right.