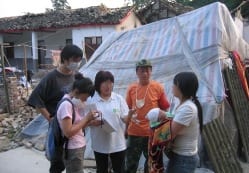 Oxfam’s assessments in several earthquake-hit areas indicate that a large percentage of the population is urgent need of resettlement.

In the town of Xiushui, in An Xian, Sichuan, hardly a building remains standing, and almost all of the survivors are homeless.

This woman (pictured) stays with her family and about 50 other people in a tent erected next to the pile of rubble which once was her house. The tent is made of a plastic woven fabric commonly called “red-white-blue” – named after the colours of the rain-resistant material. The fabric was specifically requested by the residents because it is very flexible for use – such as for ground cover or rain protection. They can easily adjust the size of their red-white-blue temporary home, pulling the fabric taut or loose, and draping it across found wood and metal, that they use as supports.

Yet this red-white-blue is only a temporary measure. It is not strong enough to endure the rainy season, with its typhoons, that will start next month, in June, and run until September or so.

It has already been raining for several days straight in Xiushui. Temperatures vary drastically: in the daytime, it reaches 25 to 30 degrees Celsius, and the men wear no shirts. At night, it can drop to 15 degrees Celsius.

The supply of stronger, enclosed tents in Sichuan province, and even in the country, remains limited. According to official figures, nearly 280,000 tents have been delivered to the affected areas so far. 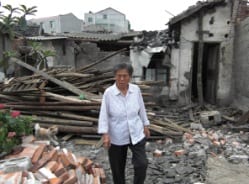 Oxfam is sourcing tents from other areas, including the adjacent province of Gansu, as well as Hebei in the north. But it takes at least two weeks for the bulk order, and in the meanwhile, the red-white-blue is meeting people’s immediate needs for shelter.

The government has just announced that it will be preparing temporary pre-fabricated shelters for the people – this will takes weeks, if not months, to have ready. To date, another 150,000 donated tents are on the way from outside Mainland China.

The woman’s husband has been missing since the earthquake. Like many other survivors, she cooks outdoors, and flies surround her food and utensils.

In addition to the red-white-blue material, Oxfam has also delivered milk to people in Xiushui, with a priority to children, women and the elderly.

People in Xiushui have shown a strong resilience in the face of the crisis. They have searched through the rubble to find maize, which they are feeding to feed the chickens that have survived. The poultry will be their meals in the future.