One month on after Indonesia tsunami and quake: concerns as monsoon threatens 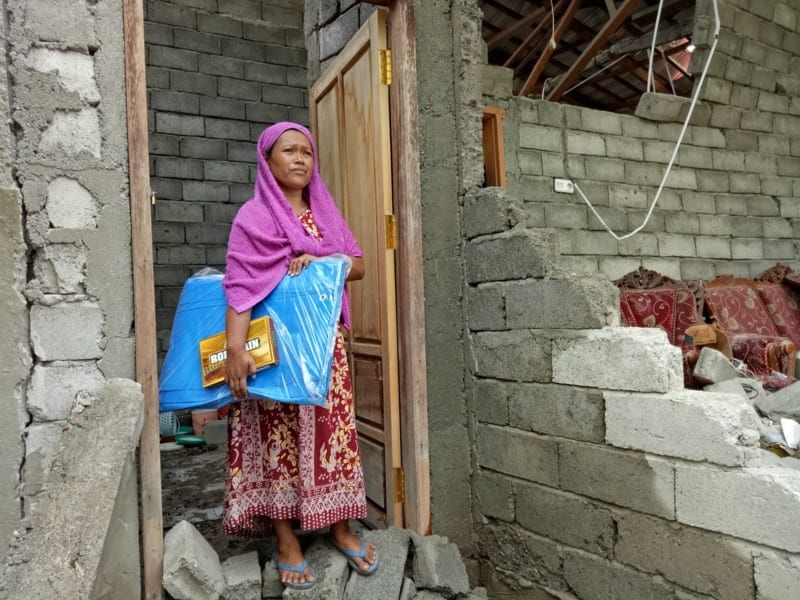 Mas’ad and her three children are living with their relatives in a makeshift camp for internally displaced people, near her destroyed house in Dampal village, Donggala district, about 700 kilometres south-north of Palu in central Sulawesi. “My three children and I ran away from home when the first quake hit. When the tremor hit for the second time, it broke my house,” she says. (Photo: Irwan Firdaus/Oxfam)

As the one-month anniversary of the Indonesian earthquake and tsunami approaches on Sunday 28 October, international aid agency Oxfam is warning of a heightened risk of disease and landslides due to the monsoon season.

More than 2000 people died as a result of the 7.4 magnitude earthquake and tsunami on the Indonesian island on 28 September, while another 211,000 people were displaced, and 68,000 homes destroyed. In total, about 2 million people are estimated to have been affected by the disaster.

Life-saving emergency supplies continue to arrive, helping thousands of people in some of the worst affected areas of Sulawesi.  But access to some areas still remains a challenge. Oxfam’s Humanitarian Manager in Indonesia, Ancilla Bere, said Oxfam – through its partner agencies – was among those still at the front line of the Indonesian Government-led response.

“Since the beginning, our partners have been working with Oxfam’s Indonesian staff on preparations to get clean water and basic supplies such as hygiene kits and shelter to the thousands of people who urgently need it,” Ms Bere said.

“Oxfam and our partners have so far reached well over 15,000 people with aid, including distribution of 5000 hygiene kits, construction of a number of latrines, distribution of clean water and purification of water, and the delivery of food, temporary shelter and clothing.”

Another seven Oxfam trucks containing 2000 hygiene kits and materials for water purification were due to arrive in Palu tomorrow, following a three-day journey from Makassar. Oxfam’s local partners in the Humanitarian Knowledge Hub, quick to organise response efforts on behalf of the Sulawesi population, had helped speed up aid distribution in recent weeks, Ms Bere said.

“One month on, far from the crisis abating, much more work needs to be done to meet the basic needs of people, with some areas yet to be reached because of impassable roads,” she said.

“We’re concerned not only about ongoing access issues but disease outbreaks such as diarrhoea, as the region is expected to receive heavy rainfall in the monsoon season, and thousands of people are still living in makeshift shelters. Heavy rain also has the potential to cause landslides in remote areas in Donggala, where Oxfam’s partners are also distributing aid.

“Oxfam, with partners, is working in three central Sulawesi districts – Palu, Donggala, Sigi – but the fact remains we haven’t reached all of the population in these areas. We also want to expand our activities to integrate public health promotion more intentionally, because the risk to people’s health with the coming rain is becoming much, much higher.” Oxfam plans to scale up its response to reach 500,000 people over the next year.

“People have lost all their assets. People have been swept away by the waves, houses have been destroyed,” Ms Bere said. “We see now these immediate impacts, but in the next couple of months we’re going to see more poverty, and we need to support the local population to get back to where they were. That’s going to be critical.”

Donations to support Oxfam’s emergency response in Sulawesi can be made online at oxfam.org.nz/sulawesi or by calling 0800 600 700.

Notes to editors: The Humanitarian Knowledge Hub is a network established with the support of Oxfam in Indonesia, which consists of 16 community organisations led by JEMARI Sakato. Oxfam in Indonesia has been working to strengthen the capacity of Humanitarian Knowledge Hub as the local force in disaster risk management. Together with Oxfam, the Hub also responded to the Lombok earthquakes in July.