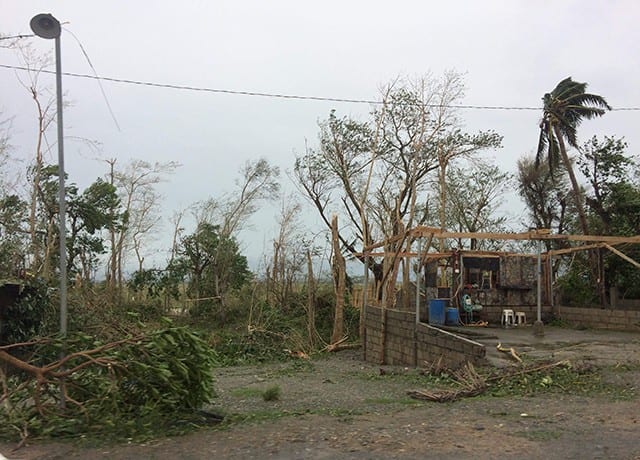 Oxfam staff on the ground in Cagayan have reported complete devastation of crops and destruction of significant damage to critical infrastructure like roads and bridges in the aftermath of Typhoon Mangkhut.

Oxfam has dispatched a team of experts on the ground to assess the water, public health and sanitation conditions following the storm. The team has been assessing damages and needs in towns in the northern coastal area of Cagayan, towns along the Cagayan River, and in the neighbouring province of Isabela, where significant damage to shelter, infrastructure, and agriculture has been reported.

Oxfam Country Director Maria Rosario Felizco said, “Addressing immediate needs is crucial to ensure the immediate safety and dignity of survivors; thus we are prioritising the distribution of water and shelter materials. But we must also anticipate that the survivors of Typhoon Mangkhut, especially small fishers and farmers who have lost their livelihoods, will need support far beyond the first few days of this response.”

Oxfam responder April Bulanadi said the scale of the destruction was heartbreaking. “The storm kept battering Cagayan hours after landfall. What I thought was a river in Iguig town turned out to be a completely submerged rice field.

“While I was able to see some farmers desperately harvesting crops the day before the storm hit, it was clear many were not able to do so. This is heartbreaking because it was supposed to be harvest season next month. This will have devastating impacts on small farmers, many of whom are still recovering from Typhoon Haima in 2016.”

Thousands of evacuees are currently staying inside churches and schools and do not have access to food, safe water, and sanitation. Families in some evacuation centres can only drink from hand pumps which are a kilometre away. Some have brought bottled water but supplies are limited.

A total of 1.5 million farmers and over 100,000 fisherfolk could be affected by the typhoon, according to government officials. Moderate estimates put potential losses to rice crops at $NZ100m, or up to $NZ220m in a worst-case scenario. Corn crops could suffer $NZ76m in losses under moderate conditions, or up to $NZ87m.

Abello-Bulanadi said rains and landslides damaged critical infrastructure like roads and bridges, making assessment difficult in some areas. “The bridge in Sta. Barbara Piat in Cagayan, which connects to other towns in Cagayan, is impassable. There are significant logistics challenges to delivering immediate support when roads, powers lines, and cell sites are down.”

William Quillopo, who lives in a coastal community in Aparri, Cagayan showed Oxfam the spot where his house used to stand. When asked by Abello-Bulanadi if he was able to save any of his possessions, Quillopo said, “I was not able to save anything. Not a single thing.”

For more information or to arrange an interview please contact:

Donations to support Oxfam’s emergency responses around the world can be made online at oxfam.org.nz/drf or by calling 0800 600 700.