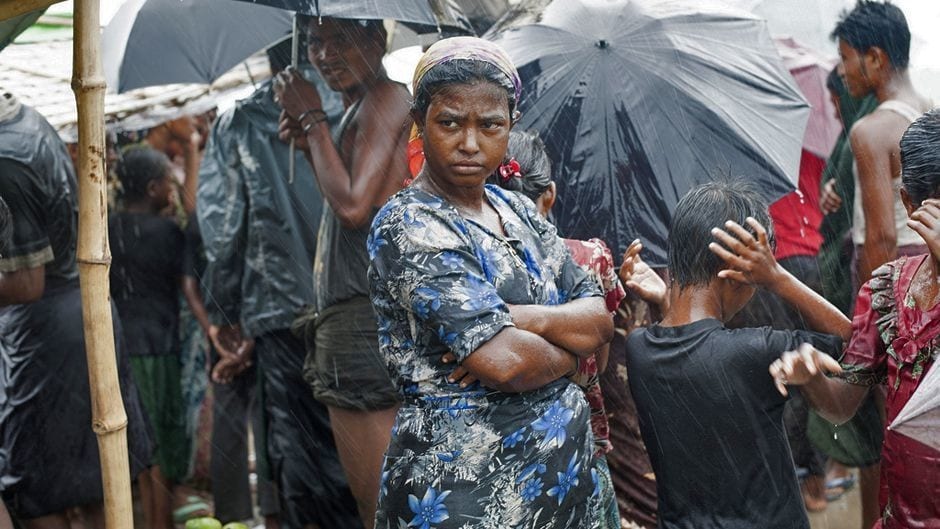 Oxfam is working with supporters, local organisations and refugees to tailor its humanitarian response to more effectively support women and girls.

This includes installing solar-powered lights along pathways, distributing portable solar lamps, running women’s groups to discuss issues like safety and early marriage, community work to tackle violence against women, and working with refugees to design new toilet facilities with features like lockable doors, shelves to keep clothes out of the mud, and screens to afford privacy.

Rohingya women living in Bangladesh are developing health problems, missing out on aid and are at greater risk of abuse due to unsafe and unsuitable facilities in many parts of the refugee camps, Oxfam warned today.

The international agency called for 15 per cent of new funding to be set aside for humanitarian programs designed to better support women and girls – including $72 million of the nearly half a billion dollars recently committed by the World Bank. Currently, there is no standalone budget for meeting women’s specific needs in the overall emergency response.

The Bangladesh government and agencies have provided emergency aid to more than 700,000 Rohingya people who have arrived over the past year, but the speed at which the world’s biggest refugee camp sprang up has made it difficult for support to keep pace.

More than a third of women surveyed by Oxfam and partner agencies said they did not feel safe or comfortable going to collect water or using toilets and shower cubicles – many of which lack a roof and a lockable door. Half the women and three quarters of adolescent girls said they didn’t have what they needed to manage their periods, including a female-only place to wash sanitary cloths without embarrassment.

As a result, women are going hungry and thirsty to avoid needing the toilet as frequently, suffering abdominal pain and infections by not relieving themselves or using unhygienic sanitary cloths, and resorting to defecation by their tents, which increases the risk of a major outbreak of disease – especially in the monsoon.

Poor facilities are also increasing the risk of sexual abuse and harassment. Hundreds of incidents of gender-based violence are reported each week.

Oxfam’s Advocacy Manager in Cox’s Bazar, Dorothy Sang, said: “The breakneck speed at which the Rohingya refugee crisis unfolded meant that many emergency facilities were installed in a rush and women’s specific needs weren’t considered. Women and girls are now paying the price in terms of their wellbeing and safety.

“This needs to be rectified urgently with substantial sums set aside to support and protect Rohingya women, such as lighting to improve safety, toilets and wash rooms that provide privacy, and extra assistance for the most vulnerable.”

Single mothers whose husbands are missing or dead head up one in six families in the Rohingya camps. They face particular problems, having to take on public roles that challenge cultural and religious assumptions about women’s place in society. Oxfam is calling for more to be done to support these vulnerable women, such as help collecting aid packages and more community dialogue about men and women’s traditional roles.

Sang added: “The Bangladesh Government should be commended for allowing Rohingya people to seek refuge in Cox’s Bazar. We join them and others in calling on Myanmar to address the discriminatory policies that are the root cause of this crisis.”

Close to a million Rohingya people have sought refuge in Bangladesh following a military campaign against them in Myanmar that has been described by UN officials as ‘ethnic cleansing’.

For an interview with Oxfam spokespeople in Cox’s Bazar or other locations, please contact:

The full findings and recommendations will be set out in Oxfam’s report, One year On: Time To Put Women and Girls At The Heart Of The Rohingya Response, which is due to be published next month.

Research led by Oxfam, Rohingya Refugee Response Gender Analysis: Recognizing and responding to gender inequalities, with Action Against Hunger, Save the Children and contributions from CARE, UNHCR, ISCG and UN Women, was published earlier this month. Survey data was collected from 482 households across 15 different camps.

The World Bank announced close to half a billion dollars of grant-based support on 28 June, to help Bangladesh address the needs of Rohingya refugees in areas such as health, education, water and sanitation, disaster risk management, and social protection. The full details of how this will be allocated are yet to be confirmed.

A 2015 UN Global Study recommended that 15 per cent of overseas development assistance is earmarked to furthering gender equality in crisis and conflict contexts.

The UN’s $1.2 billion appeal for funds to meet the most basic needs of Rohingya refugees in 2018 is currently only 32 per cent funded.

Oxfam is providing vital aid including clean water and food to Rohingya refugees in Bangladesh. So far, we’ve reached at least 266,000 people.