The Control Arms campaign, Amnesty International, Oxfam International and International Action Network on Small Arms, today presented a visual petition by one million people from over 160 countries calling for tough global controls on the arms trade and an Arms Trade Treaty.

The Control Arms campaign, Amnesty International, Oxfam International and International Action Network on Small Arms, today presented a visual petition by one million people from over 160 countries calling for tough global controls on the arms trade and an Arms Trade Treaty. 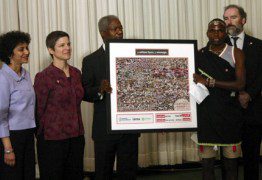 The Million Faces Petition was handed over to the UN Secretary General Kofi Annan by Julius Arile, a survivor of armed violence from Kenya and the millionth person to sign the petition. Containing the images of a million people from around the world, it is the world’s largest photo petition.

Secretary General of Amnesty International, Irene Khan, Executive Director of Oxfam International, Jeremy Hobbs and Director of IANSA Rebecca Peters represented the Control Arms campaign at the handover, which came at the opening of the United Nations world conference on small arms and light weapons.

”I am the millionth person to have joined the Million Faces Petition. I have done so because my country Kenya has suffered a great deal as a result of small arms. I would like this UN conference to agree global rules for small arms sales. We owe people like me from all over the world, this one thing,”

“The trade in small arms weapons continues unhindered to some of the world’s worst perpetrators of human rights abuses, thanks to the hypocrisy, greed and inaction of governments. The Million Faces petition is a powerful call to action from ordinary people who want tougher international arms controls. They have one message for the world’s leaders: stop irresponsible weapons transfers that fuel death, destruction and despair around the globe.”

“Small arms, more than any other types of weapons, are causing daily havoc in countries on every continent. Up to 1000 people a day die from gunshot wounds; thousands more are injured. And for every person shot, there is a family left to fend for itself; a family left without a child; or a family that must now look after a relative with a serious disability.”

“Many countries across all regions now support global standards for arms transfers. The minority of governments who still oppose progress say that the world is not yet ready for global arms export principles. The families of the 1000 people killed by guns every day would disagree…as do the million people who have spoken up to demand that this meeting take action.”

On accepting the petition, the UN Secretary General said:

“The uncontrolled spread of illicit small arms is responsible for untold human suffering. It is heartening to see the Control Arms Campaign bringing together individuals and groups from around the world to confront this problem. I hope that this petition comes to symbolise how governments and people can work together to achieve the fundamental purpose of the Review Conference – that is – saving lives.”