Are there enough fridges in developing countries for Pfizer Covid-19 Vaccine?

I listen to the World Service news each morning, and I was excited the other day that they said they were going to do a piece on vaccine access in developing countries later in the show.  I was pleased as 95% of the coverage of the vaccines issue I have heard seems to completely forget developing countries.  Imagine my disappointment when the piece was all about the fact that the Pfizer vaccine needs a super cold refrigerator to be kept without being spoiled, and that distributing the vaccine in developing countries would be hard because they don’t have a ‘super cold-chain’. It was not just the World Service either.  Listening to most of the coverage, you would be left thinking that the only thing standing between a citizen of a poor country and the vaccine was the quality of the country’s fridges. 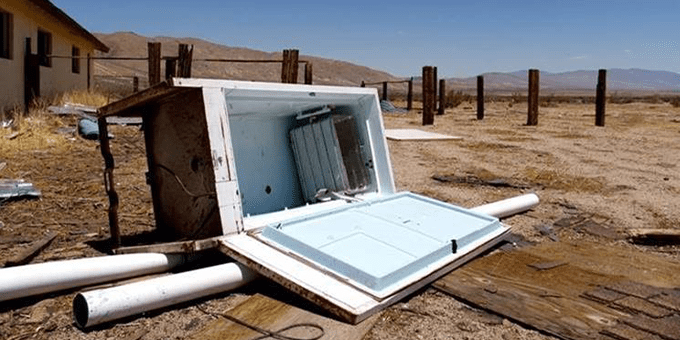 No mention of the fact that rich nations have already bought virtually all the available supply of both Pfizer and Moderna’s vaccine up to the end of 2021. There is literally none for sale to developing countries.

Also no mention of the cost, which is prohibitive for most poor nations. Pfizer’s vaccine costs $40 dollars per person.  That is more than the total per capita spending on health in Bangladesh for example. Moderna’s is even more expensive.

I took all of this not just as sign of the terrible quality of today’s journalism, but also as a bit of a personal failure, as we have been campaigning all summer for a People’s Vaccine, focusing on the issues stopping poor people in poor countries accessing a vaccine, but these issues have barely got a hearing so far. Still we must keep fighting.

A broken system for developing medicines for the world.

These first line issues of rich countries buying up supplies and the very high cost have their roots in the underlying model of relying on major pharmaceutical firms to vaccinate the world.

This deeply broken system relies on these huge corporations for global health. It is a system that has consistently failed, prioritising drugs for erectile dysfunction over malaria.  Yet rather than use the opportunity of the Coronavirus pandemic to build a better and more rational way of doing things, rich nations have doubled down on this failed approach. As Boris Johnson put it in a recent speech:

It is an approach that puts the profit, intellectual property and monopoly of Pharmaceutical corporations ahead of supplying enough cheap and effective vaccines for the world.  It is artificially rationing supply, and this in turn will cost lives. 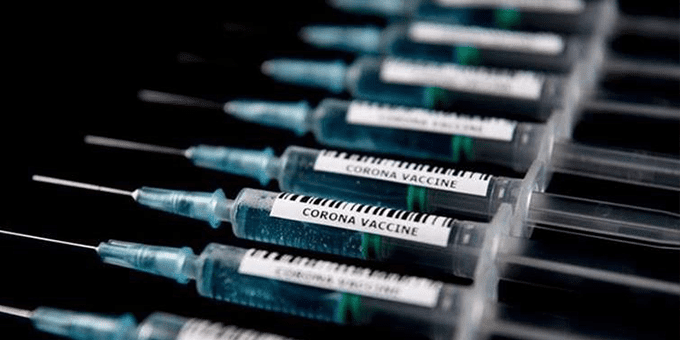 It is fact the case than none of these leading vaccines would exist without the state. The leading vaccine candidates have received billions already in taxpayer’s money. Moderna received billions in US government funding. Pfizer claims it did not, ignoring the uncomfortable fact that its partner, a German firm called BioNTech received hundreds of millions of euro in government funding. It was also BioNtech that invented the vaccine in the first place.  Pfizer are effectively just middlemen yet stand to make an absolute fortune with a profit margin of up to 80%.

As the vaccine is rolled out in the UK, US and other rich nations, the world is getting to see what a rational distribution of the vaccine should look like. No doubt some of the richest people in these countries will find a way to get the vaccine whatever happens. Nevertheless, most vaccinations are going to happen in an orderly and rational way, prioritising groups like health workers and the elderly first.

This stands in stark contrast to the way that vaccines are going to be distributed globally.  There is actually a WHO led equitable allocation framework, which would see every country having enough vaccines to vaccinate its key workers and other vulnerable groups first. Which makes sense both in terms of global health and in terms of the global economy. Yet sadly this is being completely ignored as rich nations rush to stockpile enough vaccine to vaccinate every single one of their citizens many times over. Meanwhile many poor nations have virtually no access at all.  If ever there was a need for a world government, it is now.

Yet back in the world of naked national self-interest, it is hard to blame the leaders of rich nations for wanting to ensure their citizens are safe.  That is their job after all.  It is a brave political leader who tells a voter in Manchester they must wait to be vaccinated until a health worker in Mali gets the jab. Finding a way to rationally divide up the finite supply was always going to be an uphill struggle.

Rich nations not doing enough to maximise the supply of vaccines

But what I do blame rich country governments for is failing to do everything in their power to instead maximise the supply of cheap, safe and effective vaccines.  They have immense leverage over these vaccine producers.  The huge public money they have given.  The guarantees of purchase, where as bulk purchasers they have huge power.  The fact that these firms are based in their countries. All of this leverage and more could have been used to break through the ossified system of secrecy, profit and patent and flood the world with safe and effective vaccines.

The Oxford/ AstraZeneca deal is being contrasted rightly with Pfizer and Moderna.  Oxford and AZ have done the majority of their supply deals with developing countries and are producing billions of doses. Their vaccine is far cheaper.  There is absolutely no doubt that this deal is vital for most of the world and is the best of the lot so far.

But even this deal is far from ideal.  It is still secret. It is still an exclusive license from Oxford University to Astra Zeneca, despite one of the two inventors of the vaccine Adrian Hill commenting early on that: “I personally don’t believe that in a time of pandemic there should be exclusive licenses…. Nobody is going to make a lot of money off this”. Soon after this an exclusive license was exactly what happened, in a rather grubby struggle between academics within Oxford University and involving the Gates Foundation and the UK government.  AstraZeneca eventually secured the exclusive deal by promising to help fund a new research institute at the university, and Oxford is set to potentially make a profit of $100 million dollars.

The deal was nevertheless a good one- low ‘not for profit’ prices had to be guaranteed by AZ for some developing countries in perpetuity and for the rest of the world ‘during the pandemic’ (although documents leaked to the Financial Times showed that AZ reserved the right to define when the pandemic finishes, and this could be as early as next summer).

Maybe this was the best deal that could be secured. Maybe it was not. We will never know probably as it is all clouded in secrecy, despite huge public funding. Either way it means most of the world is largely reliant on one company. A company that unlike Pfizer and Moderna, actually saw its share price fall following the announcement of its successful results in November.  Markets are punishing Astra Zeneca for having the least profitable of the three deals.

This shows the limits of expecting individual companies to act better. In some ways expecting big Pharma to invest in vaccinating poor people in poor countries is like asking a wolf to be vegetarian. Arguably they are doing exactly what they are supposed to do, make money.  Often unethically, rapaciously and excessively.  Sometimes corruptly and illegally.  But their core business is to make money and that is never going to change.

So whilst a far more regulated and policed pharma sector is essential, I think this can only ever be part of the problem of designing and delivering cheap safe and effective vaccines and medicines for all.  To do this we need to go beyond market-based solutions to this fundamental human need.  Health is a public good, which underpins everything, not least a functioning market economy.  Leaving our health to the vagaries of the market can have an astronomical cost for the rest of the economy. The last few months has demonstrated this clearly.  Health is simply too important a human need to be left to the market.

What is needed instead is a new strategy, based on the public good. So far this race for a vaccine has shown us the best of humanity, and sadly the worst too. What is needed now is imagination and ambition to build a new and permanent change in the way we develop medicines and vaccines.  I think that we need to imagine a far more public system, from the research and development all the way through to the nurse giving you our injection.

The fight for a People’s Vaccine

For the moment such decisive leadership looks sadly unlikely. But we could still see important moves by rich nations and others in the coming months that could make a huge difference.  Over a hundred leaders wrote to Joe Biden this week, calling on him to support a People’s Vaccine.  He is uniquely placed to put leverage on the majority of the leading vaccine candidates. 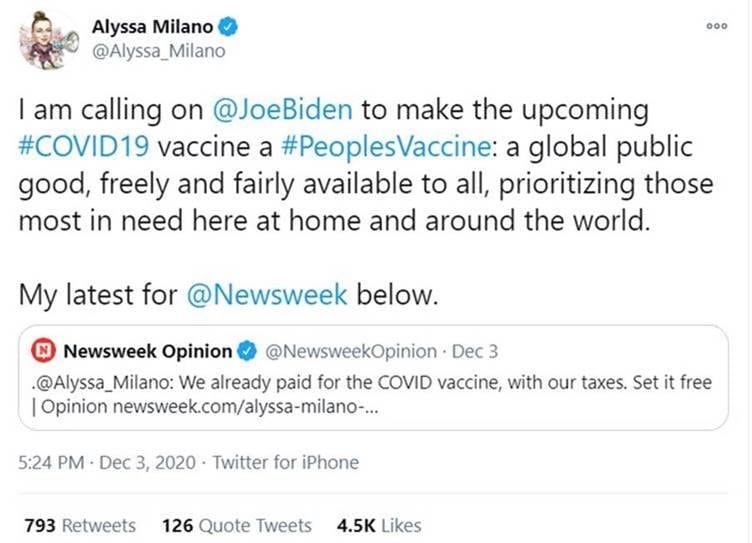 Nearly a million people have signed Avaaz’s petition for rich nations to support a waiver on all intellectual property relating to Covid-19 medicines.  This proposal has been made jointly by the governments of India and South Africa, and is so far vehemently opposed by the US, EU and UK.  The Chinese and the Russian governments have developed successful vaccines and are doing supply deals with countries all over the world, in contrast to rich nations who are only focused on their own.

As the next few months unfold, the world will watch as rich nations vaccinate their populations and beat this disease. At the same time, many, many people will continue to die in developing countries for want of a vaccine. This will put huge moral pressure on the leaders of these rich nations to do more. If we can successfully show the world that rich nations are choosing to put Pharma profit ahead of vaccinating the world, perhaps they will be forced to act.  It is certainly something worth fighting for.