Life in the Rohingya Refugee Camps.

The impending monsoon rains are bearing down on the Rohingya refugee camps in Bangladesh and there’s no getting around it – it’s going to be a really tough time.

I’ve just finished three weeks working for Oxfam’s Rohingya crisis response team in Cox’s Bazar and can remember one moment, standing in the pouring rain in the Rohingya refugee ‘mega-camp’. Everywhere I looked, ramshackle shelters made of bamboo and tarpaulins stretched into the distance. 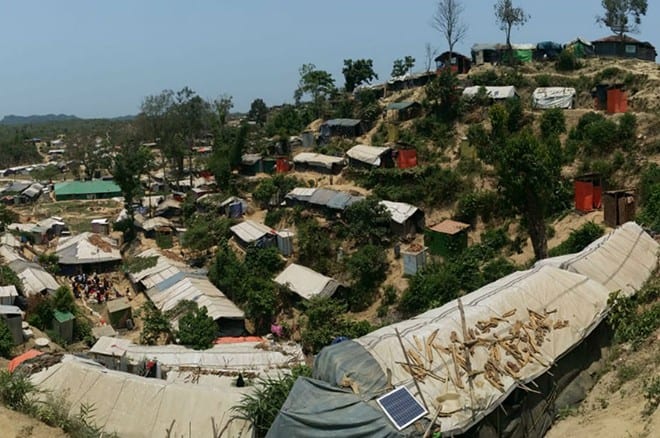 People old and young were trying to find shelter from the downpour, and large puddles were quickly forming across the narrow brick road, with water running down sandy hillside paths.

As I was trying to take photos of a deep tube well Oxfam was drilling to provide clean water, numerous Rohingya refugees offered to take me into their shelters to stay dry, or brought me umbrellas. Such was the kindness of people who had endured unspeakable horrors that forced them from Myanmar into neighbouring Bangladesh.

The camps are experiencing what they call the ‘pre-monsoon rains’ at the moment, where every couple of days a ferocious storm will hit for an hour or so. This rain is nothing like I’m used to.

The falling water has an almost physical quality, beating down on you, and the rain can be so heavy you struggle to see the other side of a road.

Trees are often blown over in the wind, and almost immediately, huge puddles form everywhere, slowing cars and trucks on the sandy, brick roads and draining into refugees’ flimsy shelters.

It’s estimated that more than 600,000 people are living in the Rohingya refugee mega-camp alone – a population almost the size of Wellington, Dunedin and Hamilton combined.

The impact of the full monsoon on this many people in such desperate living conditions is what’s top of mind for aid workers. Yet despite this, I was struck by the way in which Rohingya refugees could find hope in what appeared to be a hopeless situation. They are denied citizenship in their country – they feel they have nowhere they belong and have nowhere to call home right now. No-one knows what their future holds.

They’re awaiting monsoon rains likely to bring floods, landslides and potentially deadly water-borne diseases. The United Nations (UN) estimates up to 200,000 people are living in at-risk areas of the camps.

As much as 2.5 metres of rain could fall on the camps over the next three months. But, the refugees I met certainly weren’t hopeless or despairing.

Parents were working hard to strengthen their shelters or volunteering for charities like Oxfam as community health trainers or with the UN as camp labourers helping prepare the camps for the coming heavy rain.

Among them was a young woman I met called Ayesha*, who was 18 years old. She fled to Bangladesh with her mother and three siblings after their father was killed in the violence in Myanmar. 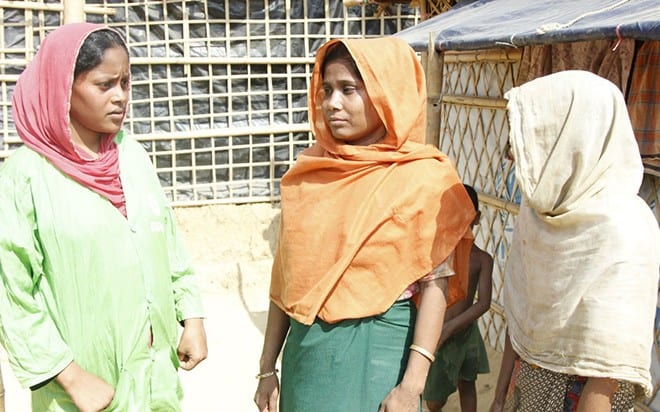 It took them nearly 5 days to get to Bangladesh by boat and foot; others weren’t so lucky and drowned when their boats sank.

Life is tough in the camps without a father or husband – women can get missed or sidelined at aid distributions, and culturally, young women are not supposed to go out alone.

But none of this had dampened Ayesha’s spirit. She put up her hand to volunteer and now runs community health training sessions with her neighbours and other women.

She told me, “Now I work as an Oxfam volunteer, I teach people how to maintain good hygiene and I tell people what to do to have a good life. I feel good about it”.

As for the children, they played football wherever they could find space, and ran through the camps in happy bunches and practised English with aid workers – “goodbye, how are you, I am fine.”