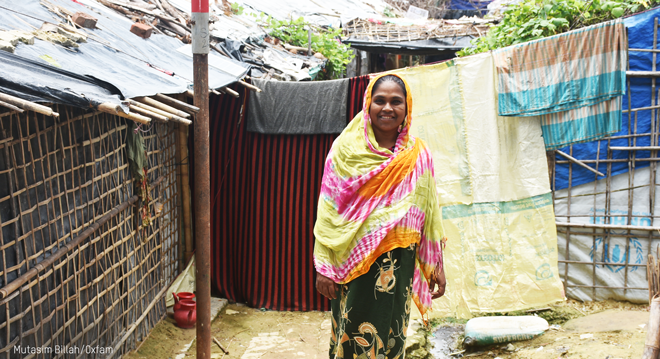 There are close to a million Rohingya refugees in Bangladesh – more than 700,000 arrived following the violence of 25 August 2017. Some have been there since the 1990s. Overcrowding and poor infrastructure leaves people exposed to diseases, especially during monsoon season, and lack of legal status prevents refugees from working, studying, getting specialist medical help, or reporting crimes. Oxfam’s Senior Communications Officer in Cox’s Bazar, Mutasim Billah, explains that a ban on refugees working and the lack of education in the camps has left many refugees feeling as though they are treading water.

Two years is a long time for lives to be left on hold, and for many Rohingya this has been the case for even longer.

Though not without worries, some Rohingya refugees in the camps of Cox’s Bazar prefer sometimes to focus on the brighter side, to share examples of how they can help themselves and their communities. They were proud to tell us how they were managing, just getting on with life.

Neighbours in a crowded community

Down a crowded path between the camp shelters, Layla, 30, is a Rohingya woman who has become something of a local hero for coming up with a simple solution to an everyday problem in her neighbourhood. As it starts to rain, we huddle together by her front door in plastic chairs carried over by neighbours, under a cleverly woven awning made of palm fronds and empty rice sacks. I could have reached across the path with arms outstretched and touched both Layla’s front door and that of her opposite neighbour across the path.

Gesturing out the front door, my colleague pointed to the host community village at the end of the lane, not 10 meters from this dense grouping of camp shelters. Layla explained, “When we first arrived here, we did not have a good relationship with our neighbours from the host community. Every day there were quarrels! For us the biggest issue was water. We want water, the host community wants water.  Everyone would just go to the taps with as many bottles as they could carry and collect as much as they could.”

Water is scarce – so how to keep the peace?

“I didn’t want to see the women quarreling at the taps, so I suggested a system. At our water tap, each Rohingya family can take two pitchers of water first. Then, the host community can come and take whatever they need. If there is a bit more water, the Rohingya can come take another pitcher. I fill the containers myself for the families to come and collect.

“I manage it this way to keep the peace in the community. Sometimes people come and thank me, and I feel good. We are managing here like this!

“Neither of us is perfect, but we are very thankful to the local people for letting us stay here. We can be respectful of each other’s values and culture while we are here.

“But if you ask us, we all say we want our citizenship, our nationality. We want to go home.”

The changing role for men

We also spoke to Kabir, who belongs to one of Oxfam’s men’s gender group which meet to talk about changing gender roles, gender-based violence and the specific challenges men face living in the camps and how to cope. Oxfam has 25 men’s groups serving about 500 men across seven camps.

Kabir told us, “There was so much we didn’t know. We learned about our responsibility to our society, our home, and our women. Women work very hard at home!

“Most of the time we forget to acknowledge that. When we were in our own country, no one ever told us to try to understand women’s contributions. Every home had conflicts. Now that we understand this, we don’t have conflict anymore – I don’t fight with my wife.”

These men’s groups are not only critical for addressing long term challenges around transforming gender roles in the camps, they also give men like Kabir a place to vent frustrations and build confidence.

He says, “I only had one year of school, I am definitely not an educated person. In the group, I learned to write my name. It feels good writing your own name! Maybe as an educated person, you wouldn’t understand, but this is a really fulfilling experience for me.”

Refugees like Layla and Kabir work hard to find ways to cope, but in many ways, their lives are in limbo.

“Now we are safe. We got a lot of support from the people living in this village. They helped us when there was no one. They provided many things,” says Kabir with deep gratitude.

“But in the future, I just want to go home. The camp is not a good place to live for your whole life. Here we are living on support. Mentally no one is happy as all of us want to go back. But for that, we need our nationality. It is our security. Without having that, we cannot go back.”

Oxfam is providing vital aid including clean water and food to Rohingya refugees. So far, we’ve helped more than a quarter of a million (266,000) people in Bangladesh and we provide ongoing humanitarian assistance to 100,000 Rohingya and Kaman Muslims confined to camps in Myanmar.