One of our rural livelihoods project in Vanuatu, that began in January 2013, was completed in February this year. It was thanks to your continued support that we were able to carry out a project of this length. Long-term projects mean long-term solutions, so thank you for sticking with us and helping us create real change. We hope you enjoy hearing the stories about what you’ve helped us achieve!

From drinking and smoking on his family’s land to farming it and making a living, Frank’s life has completely turned around after taking up an opportunity to study agriculture and carpentry through a Rural Training Centre (RTC) in Vanuatu.

He was forced to drop out of school when his parents could no longer afford the fees, so this training program, tailored for people in his situation, was his only option for further education.

Frank is one of many young people in Vanuatu who have benefitted from the courses that RTCs offer. And it’s thanks to your support!

“The trainings we received were great! I learned about different root crops, cultivation methods, and proper land management techniques. The trainings allowed me to think seriously about making my life better by starting a business.” 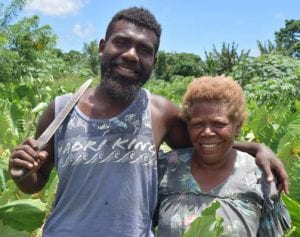 Three-quarters of Vanuatu’s population live in remote, rural communities that often lack the essential services found in the cities – like schools, water supplies, and sanitation facilities.

Young people living in these rural areas, like Frank, can miss out on many opportunities and struggle to gain a full education, find a job and support themselves and their families.

The problems and the project

One of the best ways for people to lift themselves out of poverty is to be empowered with the skills and knowledge needed to make a reliable income. That way people can afford the things they need to get by – all on their own terms. In January 2013, Oxfam kicked off a project with a local organisation, the Vanuatu Rural Development and Training Centre Association (VRDTCA), to help them support some RTCs across Vanuatu so more young people can receive training like Frank. The RTCs provide courses on everything from farming, to building, to tourism, so young people can learn skills that will help them get a job or start a business.

There were issues, however, with some of the infrastructure and facilities at the centres that were interrupting training courses and discouraging students to attend.

The buildings at many of the centres weren’t built in a way that could withstand the severe weather that Vanuatu is prone to. During events like cyclones, the buildings either got badly damaged or totally wiped out, which put teachers and students at risk and cancelled training sessions.

The water and sanitation facilities at many of the RTCs were also inadequate and discouraged students – many of whom live at the centres – from attending. Girls, in particular, didn’t attend training during menstruation as they had no way to properly keep themselves clean.

What you, Oxfam, and our local partners achieved

We supported the construction and rehabilitation of four training centres in Pektel, Torgil, Lorakau and Nakiliaena, and we ensured that those we worked on were strong enough to withstand severe weather events like cyclones. This attracts high quality trainers and more students, and means classes are less likely to be disrupted by damage to the buildings. It also means these RTCs can offer safe shelter to surrounding communities during dangerous weather events. (Special thank you to one of our major donors, who fully funded the rehabilitation of the fourth RTC after it was badly damaged by Tropical Cyclone Pam in March 2015.)

We supported the improvement of water and sanitation services to improve the students and the surrounding communities’ access to functional, hygienic facilities like toilets, showers and tap stands.

We conducted health and sanitation training for students and the wider community to improve overall health and lower illness rates. The training focused on things like good hand washing, household sanitation, and waste management. At the Torgil RTC, staff and students were very pleased when only two students got sick during an outbreak of diarrhoea – well below numbers in other communities.

“Students and community members are now equipped with the skills and knowledge to incorporate appropriate hygiene in their day-to-day activities… One of the new daily tasks every morning for the students is to clean up their bathroom and shower blocks.” – Willie Ben, who manages the RTC in Torgil.

We facilitated disaster risk reduction training which helped locals understand the safest things they can do before, during and after a severe weather event, and encouraged them to use the training centres as a form of refuge when needed. In many villages, they’re the only building capable of withstanding extreme weather.

All of this work was well accepted and locals willingly participated in all areas of it, which indicates that it aligned with the locals’ needs and priorities.

The spanners in the works

It wouldn’t be a development project if it all went to plan! Our three-year project turned into a four-year project due to a couple of curveballs.

Tropical Cyclone Pam put the project on hold for a few months when it tore through Vanuatu during March 2015, with a devastating impact. Locals who feared that their homes wouldn’t be strong enough to protect them from the storm sheltered in the new, strengthened RTC buildings as the cyclone hit. The disaster risk training was still fresh in the minds of many, which motivated more people to respond efficiently. All of the new buildings Oxfam had helped to build withstood the storm and the locals inside stayed perfectly safe, however, all of the older RTC buildings in those areas were either badly damaged or completely destroyed.

Well-timed exchange rates meant there was money left over at the end of our project, so we were able to do even more than originally planned! At the Pektel training centre, the male students had a newly built dorm with bunk beds, whereas the female students still slept on the floor of a small timber and leaf shack – so it was decided that a female dorm would be constructed with the remaining money.

By the end of the project, this is what we’d achieved at each Training Centre. 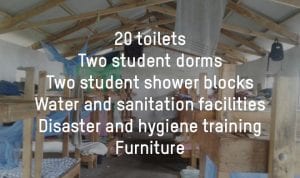 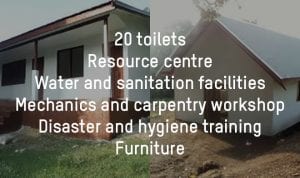 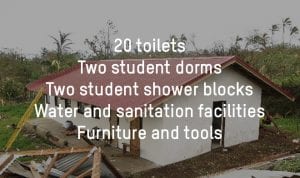 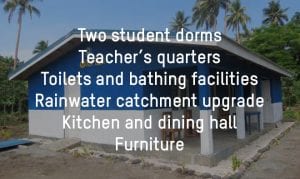 There has since been an increase in enrolments at the Pektel and Torgil RTCs, and more of the students are female than in previous years. A change of management has disrupted courses at the Lorakau RTC, but it is expected to be back on track sometime in the second half of 2017. It’s too early to tell the effects on enrolment that the improvements to the Nakiliaena RTC have made.

“Many young people in my village don’t have much to look forward to and I am glad that I have these businesses to focus on because of that I have high hopes for the future.” – Elvis Nimahunu, who in horticulture and poultry farming training at the RTC in Napil.

Download our booklet of stories of those who have been empowered by rural training opportunities.

This project was 80% funded by the Ministry of Foreign Affairs and Tourism (MFAT).