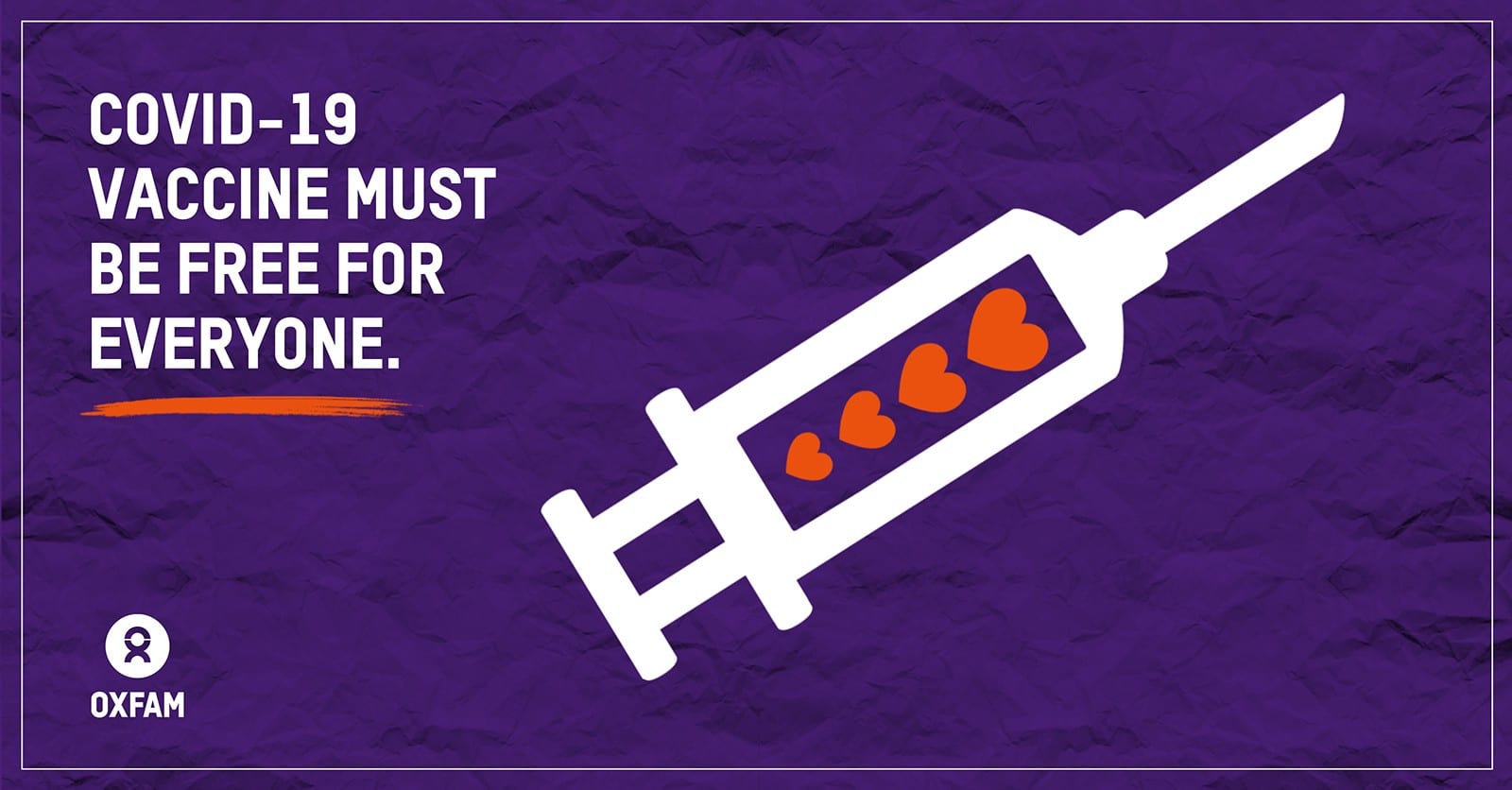 Oxfam, along with UNAIDS and over 150 world leaders recently called for the forthcoming Coronavirus vaccine to be made available free of charge, to everyone on the planet. As researchers race to find a vaccine, you asked us some great questions about our call to action. Here are our answers:

1. why is it important for the covid-19 vaccine to be free, and fairly distributed to everyone?

The Coronavirus pandemic has already cost hundreds of thousands of lives, and while it is slowing down in some countries, in others — and particularly across some of the most unequal regions — we’re seeing it continue to spread. Just last week the WHO marked Latin America as the next epicenter for the virus.

Your ability to stay safe and healthy should never be dictated by the amount of money in your pocket.

Good health is a right not a privilege and health care should be free at the point of use. Unfortunately, billions of people each year are denied health care, because they are too poor to pay the fees charged.

This pandemic has left billions of people at risk of being pushed into hunger and poverty. Which means that most people in the world will find it even harder to pay for health
care, including a vaccine, out of their own pockets. This is especially true for women and girls who are usually last in line for care, even though they shoulder the majority of care work themselves, putting them at higher risk for infection.

But a free of charge vaccine is not only about fairness. It is also imperative to protect everyone one of us.

A vaccine will only work to protect all of our health if everyone who needs it has access to it.

It is self-defeating if only rich people and rich countries get access to a vaccine because they can afford to pay. As long as some people in the world have no access to the vaccine, we all remain at risk from this virus.

While some people think the virus will simply disappear one day, and others are banking on herd immunity, it is important to know that herd immunity is often achieved through  vaccinations. Just waiting until enough people have been infected with the virus could cost millions of lives and continue to deepen inequalities between us. A price that we cannot be prepared to pay. 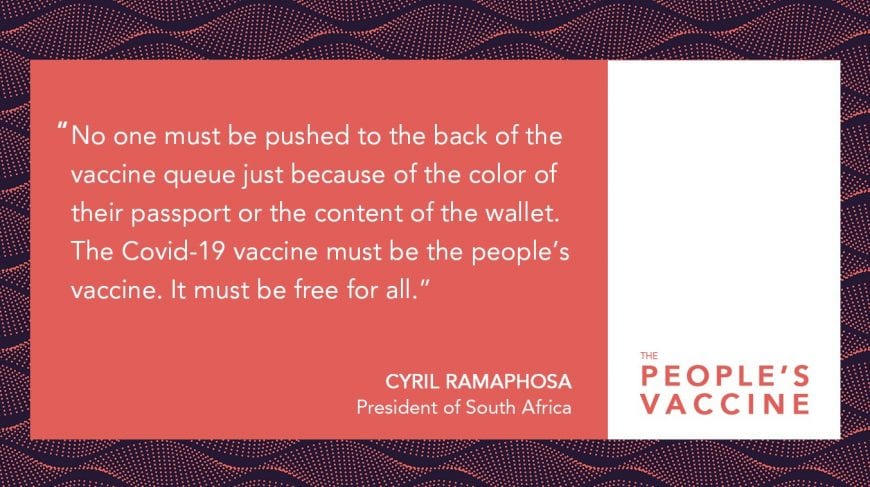 2. what does 'fairly distributed' mean?

If only limited supplies of the vaccine are available it makes sense to vaccinate those at most risk first, including frontline medical staff and other front-line workers, the elderly and those with pre-existing health conditions — wherever they are. Estimates show that there are about 1 billion people in this category.

We need a global binding agreement that governments will prioritize supply according to need and not ability to pay.

The best solution to achieving fairness is to have enough supply of a vaccine for everyone as soon as possible. Achieving this requires at least two things:

Firstly, a commitment by all governments, institutions and pharmaceutical companies involved in developing the vaccine to share the science and technologies they discover.

Rather than locking it up in patents that will be afforded to the highest bidder, the science of the vaccine and all treatments should be shared openly. This means any country or company with the capacity to do so safely can make the vaccine, while other countries will be free to import low-cost vaccines to ensure everyone on the planet can benefit from it equally.

We need to see governments investing in this additional capacity now, especially in countries that already have the technological know-how to produce the vaccine and are committed to free and fair global access. 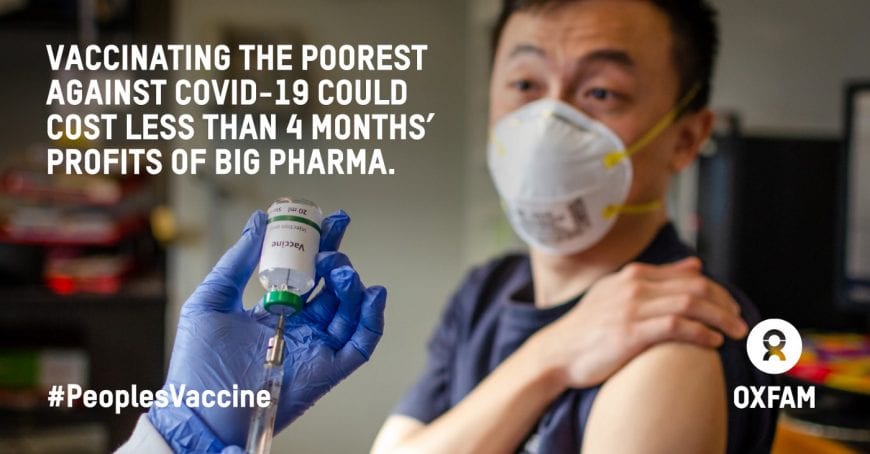 3. who will end up paying for the vaccine? can we afford for it to be free for everyone?

The vaccine needs to be a global public good — it must be produced at the lowest price possible — ‘at true cost price’ with no one profiting from its production. This is especially important because it is largely public money that is paying for its development. Ideally the vaccine should be provided at a cost of no more than $2 per dose to governments and agencies who will deliver it, and free of charge for those who get it — in rich and poor countries alike.

Oxfam has estimated that the cost of delivering the vaccine to the poorest people on the planet could be the equivalent to just 4 months’ worth of the annual profits of the ten wealthiest pharmaceutical companies in the world.

This isn’t a matter of whether it’s affordable, it’s a matter of political will to make it happen. 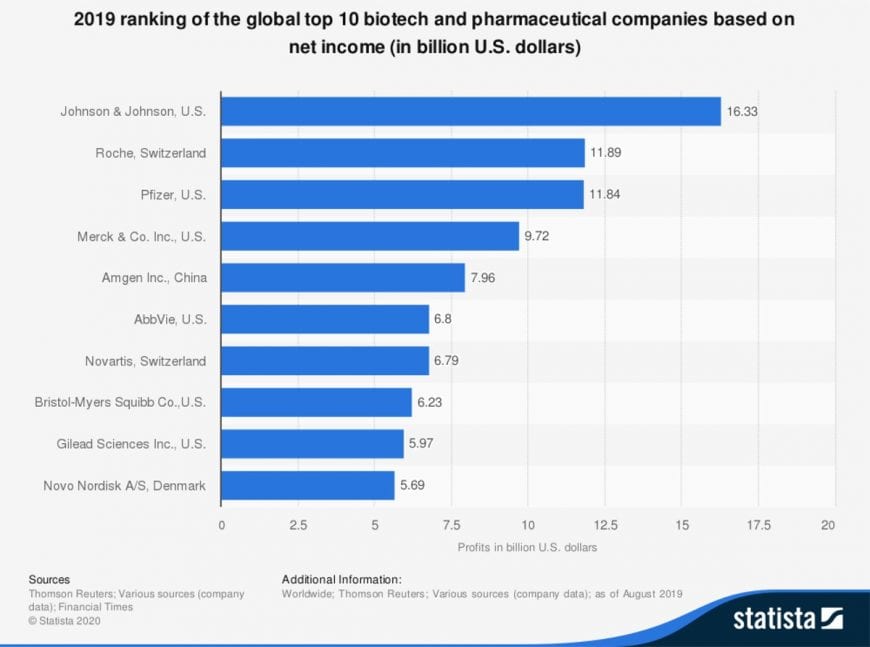 4. Is Oxfam saying the vaccine should be mandatory for all people?

At this stage, the priority needs to be on making the right steps to secure that a safe and effective vaccine is found and made available for all those who need it. If action on this is delayed the world might witness the development of a successful vaccine but it’s scarcity will mean only those with the deepest pockets will be able to access it.

Vaccines have an extremely positive track record and continue to prevent millions of deaths across the globe. Smallpox and polio are only two examples of diseases that have been erased from most societies effectively, due to vaccines.

There is a large body of scientific evidence that shows that vaccines are effective and safe. A single vaccine not only works for the person who receives it, but every single person that is vaccinated helps to prevent the spread of a disease, as they then cannot pass it on due to immunity.

Hence, vaccines are so important for everybody — not just on the individual level.

Right now, with millions of people threatened by the Coronavirus pandemic, the greatest fear is not that people will have to get vaccinated who don’t want to be protected, the fear is that not everybody who needs protection will be able to get the vaccine.

Oxfam supports calls for public information campaigns based on clear, transparent, peer-reviewed and accountable scientific evidence regarding the vaccine and any other medical solutions adopted to protect peoples’ health so that people are well informed ahead of any vaccine and treatment roll outs. 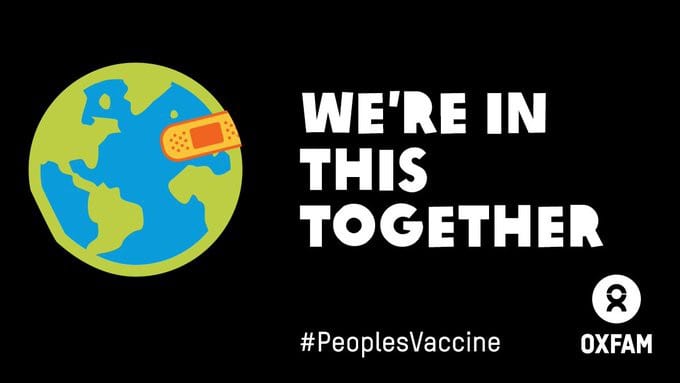 5. what are the ethical issues at stake with the development and rollout of a new vaccine?

Vaccines have contributed vastly to our overall health — only second to access to clean drinking water — and hence play an important role in our collective public health. However, there are several ethical issues that come up when a new vaccine is being developed and introduced. Here are two important ones:

While clinical trials are an inherent part of developing safe drugs and vaccines, it is of utmost importance that ethical standards are adhered to in the strictest form.

There have been appalling examples of medical testing in vulnerable communities, for example in Zimbabwe, Nigeria in the 90s or when the first ever vaccine (against smallpox) was tested in children living in an orphanage in Austria, back in the18th century.

A new vaccine needs to be developed and tested under strict ethical protocol. That is imperative.

Some drugs that are developed end up not being made available for those in most need, but for those in the “right” country or with enough cash to pay for it. Especially when there is limited supply, the tough question is who gets the treatment first.

The answer should be straight forward — those who need it, irrespective of where they live, what their income, ethnicity or gender is.

Click here to join our call for the COVID-19 vaccine to be available to everyone, in every country, free of charge.