For the last decade, Oxfam has been working with VRDTCA supporting their Rural Training Centres (RTC’s) across Vanuatu.  Places in secondary school education are very limited in Vanuatu, and where they are available they are often prohibitively expensive.  The RTC’s offer vocational training to young people close to their communities, this ranges from service industry tourism to boat repair and carpentry.

Oxfam’s role has been to provide clean water and sanitation – including water tanks and toilets in addition to rebuilding RTC’s using cyclone proof materials, where buildings had previously been built from traditional materials. This not only provides a secure base for young people to be educated but also a place for the whole community to shelter when a cyclone hits.

Yesterday after a number of attempts to contact Hillary, Oxfam were able to speak with him. He had been on Tanna Island, in one of the worst hit areas at the time of the cyclone and with communications down Oxfam were concerned for his welfare.  Hillary is now in Port Vila but was at Lorakau Rural Training Centre (RTC) on Tanna when Tropical Cyclone Pam struck.

In the days leading up to the cyclone Hillary undertook the task of raising awareness amongst the 5 communities around Lorakau, preparing the communities for an unprecedented category 5 cyclone the best he could.

He got regular updates from the National Disaster Management Office (NDMO) and provided up-to-date information to the communities to help them prepare.  As most community houses were made of elephant grass, it was clear that most were unlikely to survive the cyclone.

The photos demonstrate the power of this cyclone with all semi-permanent buildings and gardens destroyed. 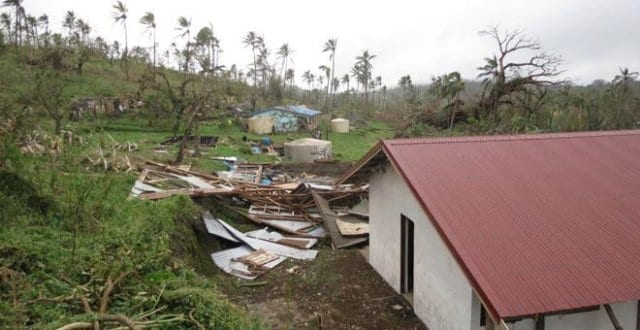 The blue-green building in the distance is the RTC built by Oxfam, this was the main building that was used as a shelter from the storm. The other older buildings were destroyed.

112 people sheltered in the RTC and survived the storm. This included 22 children between the ages 5-13 years old, 2 pregnant women and 3 new born babies with their mothers as well as other adults. 3 elderly sick people were transported by wheel barrow to the RTC because they were unable to walk. 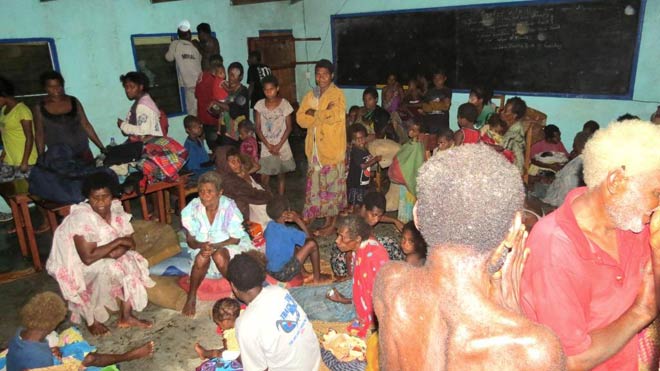 The cyclone struck between 6-10am on Saturday morning and lasted for 4 hours.

Fortunately the Lorakau RTC and the newly built boy’s dormitory held up during the cyclone and everyone stayed safe.  The older semi-permanent buildings including the workshop and surrounding community houses were destroyed or simply blown away.  There is now an urgent need for shelter, food and water. 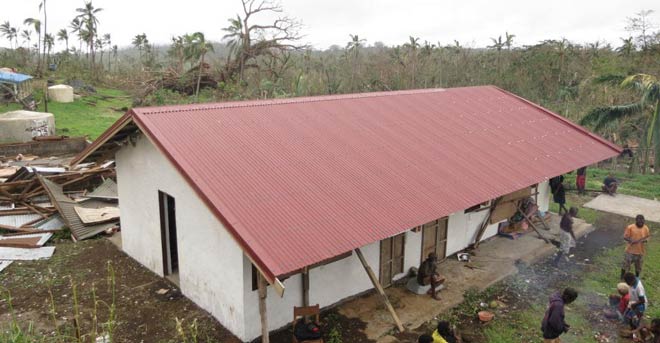 The new boy’s dormitory which was under construction did suffer some damage because it wasn’t finished – the veranda roof did not have posts as they were in the next materials shipment.

The ship with these materials was anchored at the port in Tanna prior to the cyclone; with materials for the new girls dormitory and the rest of the building materials to complete the boy’s dormitory, however the ship owner was advised by the NDMO that the ship needed to return to Port Vila before TC Pam hit Tanna, so a lot of the materials were left on the boat when it returned to Port Vila.  This will have saved them from being damaged by the storm.

However some of the materials that were unloaded were damaged – 2 tons of cement got wet (11 more tons stayed on the boat and returned to Port Vila) and a new a water tank was damaged when the straps holding it down broke, and it was blown across the fields.

VRDTCA staff are developing a response plan that will include assessments of the damage to the RTC network across Vanuatu and their needs.  This will guide Oxfam in planning its support.  With communication still difficult to the outer islands it is expected that this could take around a week.

The focus of communities over the next few weeks will be on immediate needs – shelter, food and water and the huge clean up after the destruction that TC Pam has caused.

The Oxfam partnership with VRDTCA, enabling the building of cyclone proof RTC’s, has been funded by generous donations from Oxfam supporters and from funds donated to Oxfam by the New Zealand Aid Programme through their Sustainable Development Fund.