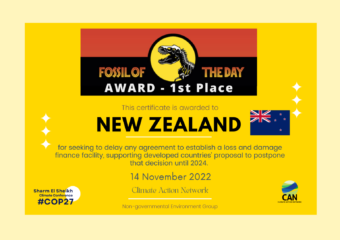 Climate Action Network International has awarded the New Zealand government the Fossil of the Day award at COP27 for opposing an agreement to establish a loss and damage finance facility this year.

This comes less than a week after the Government repurposed $20 million of its existing climate finance for adaptation and mitigation, for loss and damage.

“Our government should be standing with Pacific nations at COP27 who are calling for a global fund to address the loss and damage they are experiencing due to climate change. This is a global problem that communities on the frontlines are experiencing right now. A decision is needed now, not in a year.”

Oxfam in the Pacific’s project coordinator in Vanuatu George Koran says that it is indigenous communities who suffer from rich governments’ inaction:

“We see the impacts of climate destruction across the Pacific, in Vanuatu and now even in Aotearoa. People in the most vulnerable situations, those who do not have the capacity to adapt, suffer the consequences. The New Zealand Government say they understand the urgent need for loss and damage funds, and yet, we are not seeing any real action. It’s like robbing Peter to pay Paul – we need new and additional funding from our neighbours to fight this crisis.”

Henry said: “We call on the New Zealand Government to back-up their acknowledgement that loss and damage needs funding by supporting a new loss and damage finance facility. This will help ensure that finance to address loss and damage is accessible and sustained and is delivered in accordance with the principles of climate justice. New Zealand can pledge our $20 million allocation to the new facility.”