New Zealand’s overseas climate finance is a lifeline to many of the world’s poorest countries and communities on the frontlines of climate change, but the level of funding provided until now falls far below what is needed to meet our international obligations, according to Oxfam figures published today.

Oxfam’s new report Standing With The Frontlines, released ahead of the Climate Ambition Summit this weekend, presents fresh analysis which suggests that out of 23 high-income countries, New Zealand’s level of climate finance funding ranks just 21st when calculated on a per capita basis.

New Zealand performs well in other areas of climate finance, such as providing grants instead of loans. Given that many countries over-inflate their climate finance by counting full loan and non-concessional grant values, New Zealand’s position improves slightly to 14th when adjusted for grant and grant-equivalent contributions – but is still far below countries of comparable size such as Ireland and Denmark.

Climate finance refers to funding of initiatives that meaningfully contribute to developing countries’ climate adaptation and mitigation efforts. Under international agreements stretching back to 2010, rich countries including New Zealand promised to help mobilise at least USD$100bn in climate finance per year by 2025. The deadline for this collective goal has already been extended once, from 2020, after it became clear that contributions would not meet the required threshold.

According to the latest reported figures, New Zealand provides NZ$10.60 per capita per year in climate finance, or just under NZ$51m per year in total. Despite the government’s goal of providing NZ$75m a year in climate finance through to 2022, the country remains far behind contributing its fair share. Oxfam calculates that New Zealand’s fair share of the US$100bn goal would range between NZ$301.5m and $540m per year.

As many developing countries reel from the effects of coronavirus, climate-induced extreme weather risks are compounding crises and poverty. Climate destruction will undo decades of progress in development and dramatically increase global inequalities. There is an urgent need for climate finance to help countries cope and adapt.

“Compared to other high-income countries, when population is taken into account, New Zealand is not a generous climate finance donor,” said Alex Johnston, Campaigns Lead at Oxfam New Zealand.

Johnston said New Zealand has a moral obligation to developing countries to increase its climate finance. “In the afterglow of a symbolic step to declare a climate change emergency, we’re asking the New Zealand government to step up their climate finance contributions to meet the threshold for urgent action and deliver the vital support to developing countries that is promised.

“New Zealand’s funding of climate action overseas is a crucial way that we can stand with those on the frontlines of climate change. The way we deliver climate finance in the form of grants and with a large proportion towards adaptation sets us up to be a role model for other nations.

“But the quantities we are delivering are just not enough – we need to see a doubling of climate finance levels within a proportionately rising aid budget to get closer to doing our fair share. With the pivotal COP26 talks next year, and when we’ve just declared a climate emergency – now is the time to deliver.

“Climate finance is a lifeline for communities facing record heatwaves, terrifying storms and devastating floods. Wealthy countries like New Zealand, who have the economic capacity to act and the historical responsibility for causing climate change, owe nations on the frontlines urgent and proportionate finance to meet the scale of the crisis on their doorsteps.” 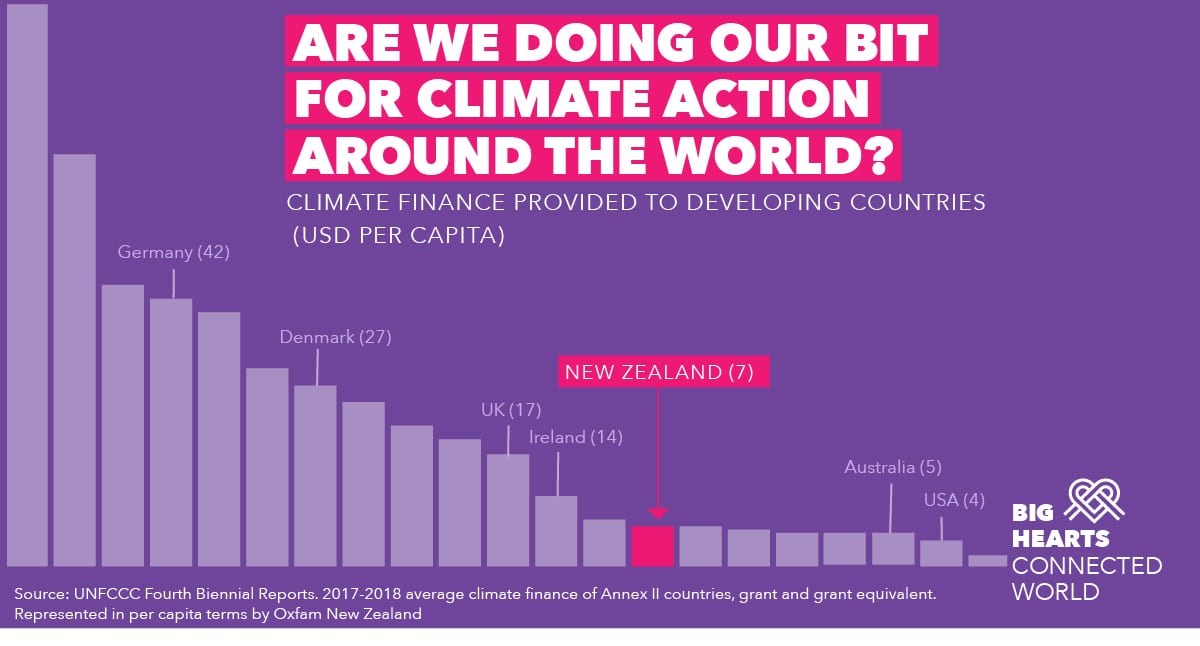 For more information or to arrange an interview, please contact: