Oxfam New Zealand has accepted a cheque for almost $1000 today from the Pacific Corporation Foundation toward recovery efforts in the Solomon Islands, following April’s flash flooding that left thousands homeless. 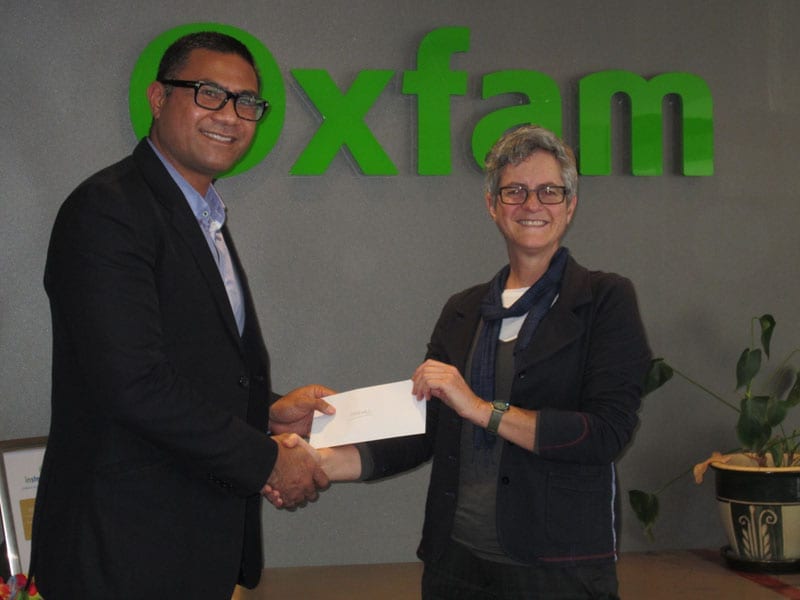 Oxfam New Zealand has accepted a cheque for almost $1000 today from the Pacific Corporation Foundation toward recovery efforts in the Solomon Islands, following April’s flash flooding that left thousands homeless.

Laulu Mac Leauanae, Chief Executive of the Pacific Corporation Foundation, has just returned from a trip to the Solomon’s representing New Zealand at the Private Sector Dialogue meeting, where he says he was moved by how much need still exists.

“I was in Honiara a couple of weeks ago and there is still a lot of infrastructure work to be completed and many people are still in need of basic necessities.

“Our work in the Pacific is undergirded with a real desire to see all Pacific communities prosper. So, when one of our family in the Pacific suffers, we all suffer,” he said.

“I’ve been aware of the great work of Oxfam for some time but have been particularly impressed with Oxfam’s Cyclone Ian relief effort in Tonga. So, as an organisation, we’re happy to provide this ‘meaalofa’ for Oxfam’s work in the Solomon Islands,” he said.

Rachael Le Mesurier, Oxfam New Zealand’s Executive Director, said the money will go a long way to supporting families who are trying to get back on their feet.

“Oxfam is hugely grateful for this donation which will increase the reach of our long-term recovery efforts in the Solomon Islands – crucial work to secure the future of communities who have already lost so much,” she said.

“When the floods hit in April hundreds of acres of crops were destroyed, small shops and boats were swept away and entire communities lost their homes and livelihoods.

“But thanks to generous Kiwis, Oxfam has been able to provide crucial, life-saving aid to over 12,000 people. We’re in the Solomon Island’s for the long haul – right now, we’re helping people rebuild their means of earning a living. Simple, cost effective solutions like providing seeds, garden spades and communal tools like axes means people can plant gardens, feed their families and sell the surplus at market to earn a living,” she said.

“There is a long road ahead for families trying to rebuild their lives, and we will ensure that this very generous donation is used strategically and has an immediate impact. A huge thank you to everyone who has donated to Oxfam’s Solomon Island floods appeal”