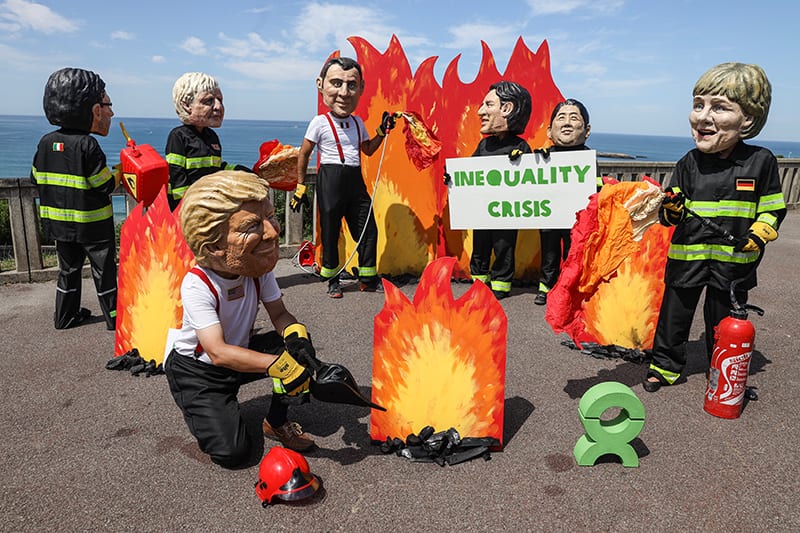 Oxfam held a climate change protest on the eve of the G7 summit in Biarritz, as world leaders put pressure on Brazil to do more to save the Amazon rainforest from wildfires.

French president Emmanuel Macron put inequality at the top of the agenda, but G7 leaders failed to make meaningful commitments to solve the crisis they have helped create, said Oxfam at the end of the Summit.

“Held in the beach town of Biarritz, France, the G7 Summit brought very few results, which will wash away with the next tide,” said Oxfam’s spokesperson, Robin Guittard. “After failing to get all seven leaders to commit to a comprehensive effort to address inequality, President Macron opted instead for a scattershot approach of piecemeal commitments that unfortunately do not add up to much.”

G7 leaders paid lip service to the dangers of inequality, but they have encouraged and enabled this unequal system to thrive by enabling the super-rich to control politics, by underfunding public services and foreign aid, by under-taxing corporations and wealth, and by fueling climate change and sexism. Perhaps it should be no surprise that at the end of the Summit, they made no commitments to reform the global tax system, invest in universal public services like education, healthcare, and social protection, or in foreign aid. The promised feminist agenda, with the ambition to follow on last year’s Canada presidency, delivered only on limited initiatives.

New business coalitions and corporate pledges pop up on a daily basis, as they did in Biarritz, but Oxfam warns that they are not the solution to the fight against inequality and climate change.

“Everyone must do their part to address inequality and climate change, but voluntary commitments by the private sector cannot replace necessary and urgent public policy and regulations,” said Guittard. “If corporations truly want to do their part, they can start by paying their fair share of taxes in the countries they do business, ensuring gender equality in their corporations, addressing CEO-worker pay ratios, and re-directing their political influence to address inequality and climate, not making it all worse.”

Even with the daily reminders that the climate crisis is upon us, the G7 did not commit to dramatically cut emissions. While France and the UK joined Germany to pledge to the Green Climate Fund, other G7 leaders missed their chance to step up to help poor countries who bear the burden and cost of climate change.

“Time is running out and the world cannot afford to squander moments like this. As the emergencies grow and the alarms ring, the public is increasingly active, showing up in millions on the streets, and in voting booth,” said Guittard. “Public pressure is growing, with young people leading the way. If leaders won’t act, they should step aside and let a new generation take charge.”

Oxfam New Zealand’s director of advocacy and campaigns, Dr Joanna Spratt, said government action on climate breakdown is critical, and New Zealand is falling behind on its responsibilities.

“Even the bare minimum contributions announced by the UK and France at the G7 summit outshine New Zealand’s commitments to the Green Climate Fund so far. New Zealand can no longer shirk its duty to replenish this critical source of funds to battle climate breakdown, and the government now must follow suit through a substantial increase in its contribution.”

At the Pacific Island Forum earlier this month, the group of Pacific Small Island Developing States issued a statement – the Tuvalu Declaration – calling on all states to take the “prompt, ambitious, and successful replenishment of the Green Climate Fund.”

“The government must listen to the voices of small island states in their calls to resource energy transition and adaptation to the climate crisis through the Green Climate Fund, instead of re-announcing money from our existing aid budget,” said Dr Spratt.

“Globally, we need to match our lofty words with actions and significantly increase our climate finance, within a rising aid budget. A good step for the New Zealand government will be a $30m replenishment of the Green Climate Fund, with a plan for increasing our contribution further.”

Oxfam is a world-wide development organisation that mobilises the power of people against poverty. Oxfam Aotearoa is a registered charity with the New Zealand Charities Register (registration CC24641). Donations are tax refundable.