Total pay-outs enough to vaccinate 1.3 billion people, equal to the population of Africa

Ahead of shareholder meetings for the giant pharmaceutical corporations, the People’s Vaccine Alliance calculates that Pfizer, Johnson & Johnson and AstraZeneca have paid out $26 billion in dividends and stock buybacks to their shareholders in the past 12 months.

This would be enough to pay to vaccinate at least 1.3bn people, the equivalent of the population of Africa.

The shareholder meetings begin on 22nd April with Pfizer and Johnson and Johnson followed by Moderna and Astra Zeneca in the coming weeks. Protests are expected outside the meetings in the US and UK while investors inside the meetings will be presenting resolutions to expand vaccine access. There is a growing backlash against the de facto privatisation of successful Covid-19 vaccines and pressure on the pharma firms to openly license the intellectual property and share the technology and know-how with qualified vaccine producers across the world.

While the global economy remains frozen due to the slow and uneven vaccine rollout worldwide, the soaring shares of vaccine makers has created a new wave of billionaires.

The founder of BioNTech, Ugur Sahin, is now worth $5.9. billion and Moderna CEO Stephane Bancel $5.2 billion. According to regulatory filings, Bancel has cashed out more than $142 million in Moderna stock since the pandemic began. Many other investors have also become billionaires in the last few months, while the International Chamber of Commerce projects a worst-case GDP loss of $9 trillion due to global vaccine inequity.

“This is a public health emergency, not a private profit opportunity,” said Oxfam Health Policy Manager Anna Marriott. “We should not be letting corporations decide who lives and who dies while boosting their profits. We need a people’s vaccine, not a profit vaccine.”

‘Vaccine apartheid is not a natural phenomenon but the result of governments stepping back and allowing corporations to call the shots. Instead of creating new vaccine billionaires we need to be vaccinating billions in developing countries. It is appalling that Big Pharma is making huge pay-outs to wealthy shareholders in the face of this global health emergency,” Marriott said.

While one in four citizens of rich nations have had a vaccine, just one in 500 people in poorer countries have done so, meaning the death toll continues to climb as the virus remains out of control. Epidemiologists are predicting we have less than a year before mutations could render the current vaccines ineffective.

One of the reasons Pharma companies have been able to generate such large profits is because of intellectual property rules that restrict production to a handful of companies.

Last week, 175 former heads of state and Nobel Prize winners, including Helen Clark, Gordon Brown and Francoise Hollande wrote to President Biden to ask him to support the temporary waiving of intellectual property rights for Covid-19 vaccines to enable the rapid scale up of vaccine production across the world. They join the 1.5 million people in the US and other nations who have signalled their support for a Peoples Vaccine.

Over 100 low- and middle-income nations, led by India and South Africa, are calling at the World Trade Organisation for a waiver of intellectual property protections on Covid-19 products during the pandemic, a move so far opposed by the US, EU and other rich nations. New Zealand has not yet come out in support or in opposition to the waiver proposal. The Biden administration is reportedly considering dropping US opposition to the waiver, with the US Trade Representative saying at the WTO that ‘the market once again has failed in meeting the health needs of developing countries.’

Moderna, Pfizer/BioNtech, Johnson & Johnson, Novovax and Oxford/AstraZeneca received billions in public funding and guaranteed pre-orders, including $12 billion from the US government alone. They also made use of many years of publicly funded research and discoveries. Researchers for Universities Allied for Essential Medicines found that only 3% of the R&D costs to develop the Oxford/AstraZeneca vaccine and its underlying technology was privately funded. AstraZeneca is producing and supplying the vaccine at no profit during the pandemic.

“These vaccines were funded by public money and are desperately needed worldwide if we are to end this pandemic,” said Heidi Chow, Senior Campaigns and Policy Manager at Global Justice Now.

“It’s morally bankrupt for rich country leaders to allow a small group of corporations to keep the vaccine technology and know-how under lock and key while selling their limited doses to the highest bidder.” Chow added.

Moderna and Pfizer/BioNTech’s successful mRNA vaccines are set to become two of the three bestselling pharmaceutical products in the world. The companies are projecting revenues of $33.5 billion in 2021 from their vaccines.

Their vaccines are also the most expensive, ranging from $13.50 to $74 per course, with both firms looking to increase prices.  In an investor call, Pfizer cited between $150 and $170 a dose as the typical price it receives for vaccines. This is despite a study from the Imperial College in London showing that the cost of production of new mRNA vaccines could be between 60 cents and $2 a dose.

The two firms have also sold the vast majority of their doses to rich nations. Moderna has so far allotted 97% of their vaccines to wealthy countries and Pfizer 85%. Co-developed with the US Government’s National Institutes of Health, Moderna’s vaccine is likely to make $5 billion in profits in 2021. The company received $5.45 billion in public subsidy.

All the major pharmaceutical companies are fiercely opposed to the open sharing of technology and the suspension of intellectual property protections. The CEO of Pfizer responded to moves by the WHO to pool vaccine technology to enable other qualified producers to make vaccines by saying he thought it was ‘nonsense, and… it’s also dangerous.’

The African Alliance’s Maaza Seyoum, who is leading the People’s Vaccine Alliance’s Africa efforts said ‘Big business as usual will not end this pandemic. This is clearer now more than ever. President Biden has an historic opportunity to show that he will put the health of all of humanity and shared economic prosperity ahead of the private profits of a few corporations.’

The People’s Vaccine Alliance is a movement of health, humanitarian and human rights organisations, past and present world leaders, health experts, faith leaders and economists advocating that Covid 19 vaccines are manufactured rapidly and at scale, as global common goods, free of intellectual property protections and made available to all people, in all countries, free of charge.  www.peoplesvaccine.org

More information of each of the leading western vaccine producers: Oxford/ Astra Zeneca, Johnson and Johnson, Pfizer/ BioNtech, Moderna/NIH and Novovax can be found in the Oxfam media brief, Shot at Recovery.

The total shareholder payouts is the sum of Total Dividends Paid and Share Repurchases in the companies’ financial year 2020, as found in company financial filings. The average vaccine cost, $19, is based on the median average of the 5 leading vaccine producers. At this price, the $25.74 billion in shareholder pay-outs could pay for 1.354 billion doses. The Peoples Vaccine does not endorse a price of $19 dollars and is only using this as an illustration.  Prices can and should be far lower than this to make vaccinating the world possible.  The population of Africa is estimated by the UN to be 1.36 billion people.

The New Zealand Government has not yet come out in support of the proposal to waive intellectual property rights on coronavirus products, including the vaccine, for the duration of the pandemic. Instead, it has put its efforts behind encouraging the pharmaceutical corporations to voluntarily share their intellectual property, know-how and technical capacity. 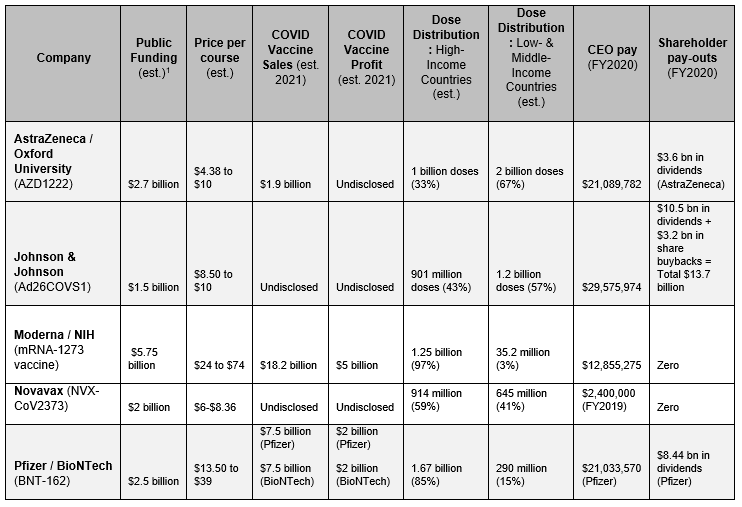 [1] Transparency in public funding is lacking across all the COVID-19 vaccine developers, making firm figures difficult. Oxfam has arrived at these estimates by analyzing the research and development, manufacturing and advanced purchase deals made between the companies and some governments, notably the US. While Oxfam attempted to include all sources of public funding across these 3 areas (research and development, manufacturing and procurement), we were not able to be comprehensive due to contract opacity. Note also that these sums do not include the public investments in years of early research, which preceded COVID but was essential to these vaccines succeeding. Theses amounts also do not include purely philanthropic contributions. As a result, these estimates are conservative, and likely much less than the total public investments.