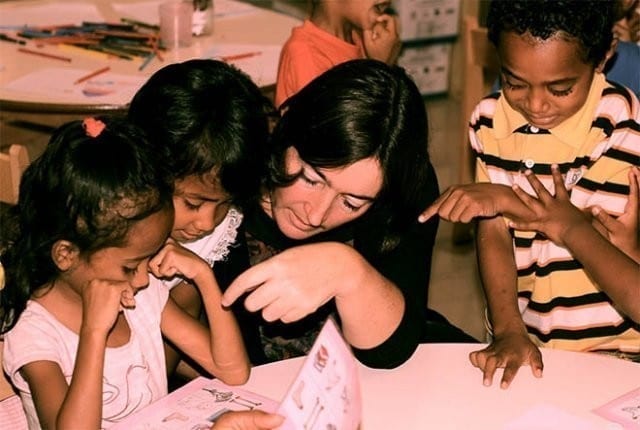 As a twenty-something backpacker with a love of languages, Anna Mosley explored remote pockets of China, Cambodia and Laos, piquing an interest in development work.  Now, fifteen years on, she has worked across Latin America and Asia supporting poor communities in remote regions. She tells us about her new role, her abiding love of Timor Leste and her desire to learn Vanuatu’s national language Bislama.

I work on programmes that Oxfam New Zealand funds in Vanuatu and Timor-Leste with Oxfam’s offices in those countries. Oxfam is shifting the way it works so that decisions about programming are made by people locally. So my role is to liaise with the New Zealand government and other funders and to work with the country offices by applying my knowledge and experience of Timor-Leste, rural development, literacy education, data management and sound development programming.

How did you first get into development work?

I’ve always loved learning languages, but it took me a while to figure out that it was more than languages that interested me – it was the way language opens up windows into culture and how people live. Learning languages has allowed me to understand the issues people face in these countries at a deeper level. As I travelled through Southeast Asia, I met people working with development agencies, and realised that there was a career that would put my love of languages and my desire to understand people’s lives to good use. I thought: “that’s something worthwhile that I could give my life to”, so I headed back to New Zealand to get my Masters in Development Studies.

You first worked in Oaxaca in Southern Mexico after you completed your masters degree, how was that?

It was amazing – Oaxaca has sixteen different ethnicities in the state, many of them strong indigenous cultures with longstanding traditions of organisation and self-determination. After I finished my thesis I worked for a couple of local NGOs doing rural development work. We worked with communities that were four hours walk from the nearest road, so sometimes I would don my backpack and walk into these isolated communities. I remember being astonished that some people had refrigerators that they’d carried in on their backs!… I would stay for three days at a time, listening to the men, and then to the women, and developing community development plans. Roads were always top of the list! One community got a road while I was working there, others started beekeeping programmes, school holiday programmes for the kids, coffee co-operatives, and worm farms for waste management. I loved it! Later on I worked for the NZ Ministry of Foreign Affairs and Trade, and travelled to Indonesia and Timor-Leste, and ended up living in Timor-Leste for three years. And it’s been great to finally get to the Pacific now I’m working with Oxfam!

Timor-Leste is a country that is close to your heart, why’s that?

It has such a tragic history, and it’s been a privilege to get to understand it a little as a new country that’s charting its own development now, and has such potential to make good choices so that people can feel that all they went through was worth it. It was only when I lived there between 2011 and 2015 that I really began to understand people’s histories, and how things work in Timorese culture. It’s a fascinating and beautiful country. I was privileged to hear little bits of personal and national histories as I travelled around with Timorese colleagues, and hearing what had happened in different places changed the way I saw the landscape – maybe a little bit like how tangata whenua in New Zealand see their history embedded in the land. There are cliffs that were called ‘Jakarta’ because people who were thrown off by the Indonesian military were told they were “going to Jakarta.” At the same time, it was such a great place to live for me and my family – travelling to the beautiful and laid-back Atauro Island, or having brunch at the beach never got old.

What are some of one of the most eye-opening situations that you’ve been in?

In Timor-Leste, I went to visit a financial literacy programme for women running small businesses. It was only then that I began to understand the difficulties  involved in applying the training to their businesses.-Some of them women had been to primary school, others had never been to school.  Some would spend the lesson just practising writing down the numbers. Iit really hit home how hard it is to show the impact of our programmes, because they were all at different levels. The averages really hid the real stories.  Often you don’t understand these things unless you are immersed in the culture and society – and that’s why I think Oxfam’s approach, where decisions are made by the offices in the country concerned and our development programming is run by supporting local organisations, is the right one.

Seeing other peoples’ perspectives is crucial in your work. Do have you any examples of when you’ve come to see things from a different point of view?

Yes, in order to get to grips with development, you need a deep understanding of that culture and your own cultural blind-spots. For example, in the western world, it’s easy to take for granted the management model we’re used to but it’s not one that always works well in other places. Performance management, for example, can be a pretty fraught exercise in a small society where family relationships, status and belief in black magic all come into play, like in Timor Leste.

You’ve got five languages up your sleeve (Spanish, Portuguese, Japanese, Tetun and Mandarin). What language are you thinking of learning next?

It really has to be te reo, but I’m also tempted by Bislama, one of Vanuatu’s official languages… there are too many interesting languages and places in the world to stop at just one more.
Menu
Facebook Twitter Instagram Youtube Linkedin