Protecting the accused: Sorcery in PNG

Oxfam’s report highlights why action must be taken against sorcery accusations in Papua New Guinea.

Every society has its own interpretation of how and why the world works.

People in Papua New Guinea and across Melanesia have strong connections with the spiritual world. It’s common for them to reject natural causes as an explanation for misfortune, illness, accidents or death. Instead they are attributed to supernatural causes commonly referred to as sorcery or black magic — sanguma in the local pidgin.

Sorcery is a concern for Oxfam because accusations of sorcery — when an individual or group blaming another for committing it — cause violence, conflict and damage to property and livelihoods.

Families are torn apart, people are banished and communities crumble. Sorcery accusations add another layer of complexity to a society already struggling with unemployment, chronic gender-based violence, HIV and AIDS and tribal conflict. They damage the country’s long term development and are a fundamental obstacle to basic human rights.

If someone gets sick, loses a job or has something stolen they blame someone for committing sorcery on them as the root of their misfortune. Others make sorcery accusations for opportunistic reasons, knowing the victim is likely to be banished and they can make claims on the animals or property that are left behind.

HIV and AIDS is explained through the prism of sorcery, hindering efforts to halt the spread of infection. This is a particularly worrying trend in a country where the adult prevalence rate for HIV and AIDS stands at 0.7% (UNAIDS, 2014).

Victims of sorcery accusations are the most vulnerable — women, widows without male kin, elderly people. People who are resented or envied (most often independent or progressive women) fall victim to accusations.

The most common people to cast accusations of sorcery are young men.

People believed to have committed black magic are subject to mob justice and shocking ‘payback’ murders, torture or punishment. Sexual assault, burial alive, stoning, being thrown off cliffs, drownings, mutilation and brutal beatings have been reported. The recent high media profile of the Kepari Leneiata case demonstrates how barbaric punishments are.

The fear of being a victim of sorcery and the fear of being accused of sorcery breeds distrust and suspicion, escalating simmering tribal tensions and conflict. Accused people lose their land, gardens and livelihoods and risk permanent banishment from their homes, villages and wider community. In Simbu province it’s estimated 10—15 per cent of the population has been banished because of sorcery accusations. In one village, 20 households had been banished. 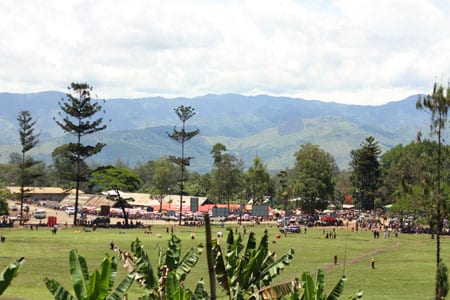 Oxfam and the Melanesian Institute have carried out research to help communities and local NGOs better understand the causes, forms and impacts of sorcery accusations.

The research team used a variety of investigative techniques including discussions, mapping and interviews across the Gumine district of Simbu, concluding that education is critical in reducing sorcery accusations and the existing legal parameters for dealing with accusers and the accused need reforming.

Through community discussion, workshops, local influencers or drama, Oxfam’s partners in PNG can educate people on the negative impact that sorcery accusations have on households, clans and communities.

Poverty is a driving factor in sorcery accusations. Envy that a woman is making money from her vegetables or worry over babies becoming sick lead to suspicions of black magic.  Cheap, easy interventions that alleviate poverty can reduce the number of accusations: for example clean water, hygiene education and improved agricultural practices reduce the incidence of sickness in a village.

And another important step forward is to gain a deeper understanding of what motivates people to make sorcery accusation, including the role of the church in encouraging or dissuading beliefs.

Belief in black magic is so ingrained the government recognises it under the 1971 Sorcery Act. The Act punishes those practising sorcery with up to two years’ imprisonment and murderers can reduce penal sentences by alleging black magic was involved.

The Sorcery Act does have the merit of criminalising the torturers and killers of accused sorcerers. It is stated in the preamble that there ‘is a danger that any law that deals fully with sorcery may encourage some evil-intentioned people to make baseless or merely spiteful or malicious accusations that their enemies are sorcerers solely to get them into trouble with other people, and this is a thing that the law should prevent’. But in reality penalties and provisions outlines in the Act focus mostly on the sorcerer as perpetrator, and do not adequately cater for instances in which the alleged sorcerer is the victim, which presumably should be considered under legal charges of assault, manslaughter or murder.

The PNG Constitutional and Law Reform Commision has recently submitted a draft  bill to parliament for the Act’s repeal.

There is potential for advocacy work at the national level towards better protection for those accused of sorcery and for the repeal of the Sorcery Act. Advocacy could influence the structures and institutionalised attitudes that perpetuate sorcery accusations and ensure the government invests more in community education programmes.

By buying a gift from Oxfam Unwrapped you can help support our gender justice work in Papua New Guinea. Take a look at Oxfam Unwrapped’s gifts with a difference and help lift people out of poverty, for good.