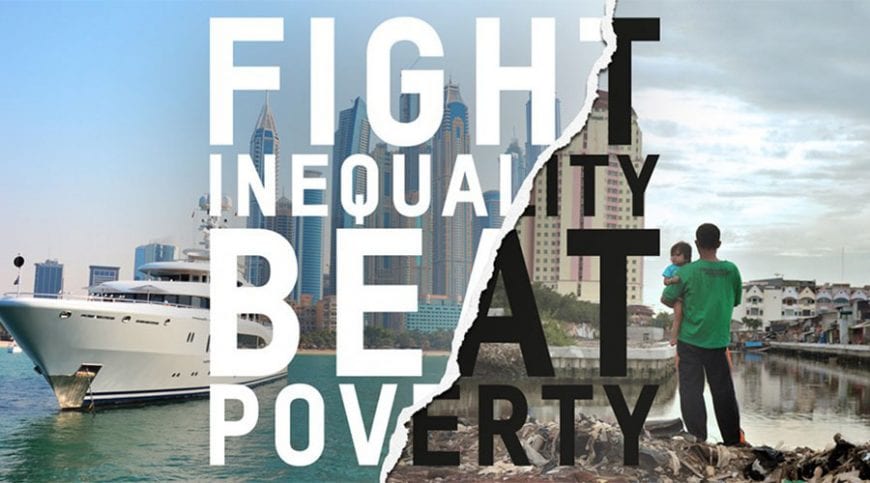 Eighty two per cent of the wealth generated last year went to the richest one per cent of the global population, while the 3.7 billion people who make up the poorest half got nothing, according to a new Oxfam report released today.

The report is being launched as political and business elites gather for the World Economic Forum in Davos, Switzerland.

Earlier today Oxfam New Zealand reported that the richest 1 per cent of Kiwis bagged a staggering 28 per cent of all wealth created last year while the poorest 30 per cent of the population got just 1 per cent.

‘Reward Work, Not Wealth’ reveals how the global economy enables the super-rich to accumulate vast wealth at the expense of hundreds of millions of people who are struggling to survive on poverty pay.

• 2017 saw an unprecedented increase in the number of billionaires, at a rate of one every two days. Billionaire wealth has risen by an average of 13 per cent a year since 2010 – six times faster than the wages of ordinary workers, which have risen by a yearly average of just 2 per cent.
• It takes just four days for a CEO from one of the top five global fashion brands to earn what a Bangladeshi garment worker will earn in her entire lifetime. In the US, it takes slightly over one working day for a CEO to earn what an ordinary worker makes in a year.
• It would cost $2.2 billion a year to increase the wages of all 2.5 million Vietnamese garment workers to a living wage. This is about a third of the amount paid out to wealthy shareholders by the top 5 companies in the garment sector last year.

Oxfam’s report outlines the key factors driving up rewards for shareholders and multi-national corporate bosses at the expense of workers’ pay and conditions, particularly in developing countries. These include the erosion of workers’ rights; the excessive influence of multi-national big business over government policy-making; and the relentless corporate drive to minimise costs in order to maximise returns to shareholders.

Oxfam has also highlighted the role of tax havens in helping the extremely wealthy become even richer, with multinational tax avoidance from corporations costing poor countries at least $100 billion each year. Furthermore, many of these companies are growing their profits at the expense of their workers – paying unfair wages, and forcing them to work in gruelling conditions.

Rachael Le Mesurier, Executive Director of Oxfam New Zealand said: “The billionaire boom is not a sign of a thriving economy but a symptom of a failing economic system. The people who make our clothes, assemble our phones, and grow our food are being exploited to ensure a steady supply of cheap goods, and swell the profits of multi-national corporations and billionaire investors.’

Women workers often find themselves off at the bottom of the heap. Across the world, women consistently earn less than men and are concentrated in the lowest paid and least secure forms of work. By comparison, 9 out of 10 billionaires are men.

“Oxfam has spoken to women across the globe whose lives are blighted by inequality. Women in Vietnamese garment factories who work far from home for poverty pay and don’t get to see their children for months at a time.

Women working in the US poultry industry who are forced to wear nappies because they are denied toilet breaks. Women working in hotels in Canada and the Dominican Republic who stay silent about sexual harassment for fear of losing their jobs,” said Le Mesurier.

Oxfam is calling for governments globally to ensure our economies work for everyone and not just the fortunate few:

Results of a new global survey commissioned by Oxfam demonstrates a groundswell of support for action on inequality. Of the 120,000 people surveyed in 10 countries, nearly two-thirds of all respondents think the gap between the rich and the poor needs to be urgently addressed.

“It’s hard to find a political or business leader who doesn’t say they are worried about inequality. However there are not that many who are doing something about it. Many political leaders are actively making things worse by slashing taxes and scrapping labour rights,” said Le Mesurier.

“People across the globe are ready for change. They want to see workers paid a living wage; they want multi-national corporations and the superrich to pay more tax; they want women workers to enjoy the same rights as men; they want a limit on the power and the wealth which sits in the hands of so few. They want action from their governments.”

‘Reward Work, Not Wealth’ and a methodology document that outlines how Oxfam arrived at the key statistics in the report, is available for download here.