As the anniversary of the Syria crisis approaches, refugees surveyed say they fear they will not see Syria again, according to new research by Oxfam. Urgent need for Geneva peace process to be kick-started as well as improved response from donor countries to UN’s humanitarian appeals.

As the anniversary of the Syria crisis approaches, refugees surveyed say they fear they will not see Syria again, according to new research by Oxfam

More than 65 per cent of refugees surveyed by Oxfam fear they may not be able to go back to Syria despite desperately wanting to return.

Oxfam researchers surveyed 151 households of refugees in three areas of Jordan representing 1015 people. While the overwhelming majority of refugees want to return to Syria, just a third of those questioned said they could clearly see themselves returning home. Of these refugees, 78 per cent still said that they did not know when this would be.

Now, with the conflict entering its fourth year, Oxfam says the international community must urgently help end the crisis so refugees and displaced people inside Syria can return home and start to rebuild their lives.

Syria’s neighbouring countries have shown incredible generosity in continuing to offer a safe refuge for people fleeing the crisis, but with the number of refugees now topping 2.5m, pressures on basic services is beginning to show.

Andy Baker, who heads up Oxfam’s response to the Syria crisis, said: “The survey shows that for many refugees hope of returning to Syria sometime soon is dwindling. They are living in limbo, battling each day to survive, with little idea of what the future holds. That must change. Syrians deserve better than this.

“Renewed efforts must urgently be made by the international community to help stop the bloodshed and bring an end to this devastating conflict which has destroyed so many lives. It’s time for the next round of the Geneva peace talks to start – and for real and lasting progress to be made around the negotiating table this time,” he said.

The humanitarian response to the crisis has called for unprecedented levels of aid so far. The UN has appealed for a record-breaking $6.5bn, which under-estimates the true scale of the need. A total of $2.3bn was pledged at the Kuwait Donor Conference in January but so far, just 12 per cent of the appeal ($768 million) has been delivered by donor countries since the launch in December.

Oxfam fears that unless donor countries find the money desperately-needed to fund the humanitarian response, then Syrians – both inside Syria and in neighbouring countries – will lack the food, water, shelter, medical care and education they need.

Baker added: “Plans for a long-term recovery need to be drawn up as even if the conflict were to end tomorrow, Syrians would need assistance for years to come.

“We urge donor countries to give generously to the UN appeals to help ensure Syrian people – both inside Syria and in neighbouring countries – have the humanitarian assistance they need.

“In particular, significant support is needed for neighbouring countries. Basic services in countries such as Jordan and Lebanon are stretched to the limit with schools and health clinics responding to meet the dramatically increased demand.” 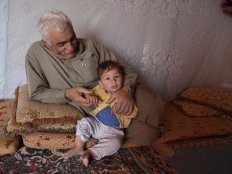 Abu Mustaffa, father-of-seven, from Hamra governorate, in Syria, who now lives in a tented settlement, in the Jordan Valley, says: “No one can go back to our village, it’s too dangerous and life is too difficult…we want people across the world to help us to get back to our country.

“At the moment, I am not hopeful that there will be any peace, I feel hopeless. We all hope things will get better, but nothing happens. I want to go back to normal life where everything is fine and people have stopped killing each other.

“We hope to go back so that our children will return to their schools to learn, to farm their land and be productive in their own country.”