Vanuatu is a lush archipelago of more than 80 scattered volcanic islands.

Agriculture, fishing, offshore financial services and tourism are the economic mainstays, yet 76 per cent of Vanuatu’s population live a subsistence lifestyle.

Rural areas are often remote and have limited infrastructure. Climate change threatens Vanuatu’s food security and the country is particularly vulnerable to cyclones and other disasters.

Rapid population growth has put pressure on health and education services, along with job opportunities. Budget restrictions mean there are not enough secondary schools. It’s not uncommon for children to finish formal education at age 10. Those who do secure a place at secondary school often find it too expensive to complete.

Employment choices for these young people are often limited to helping with domestic chores or working on small family farms. There is waning interest in farming as a livelihood and many head to the cities, adding to growing youth unemployment and  placing them at increased risk of poverty.

In Vanuatu, Oxfam is training and supporting farmers to establish and grow small-scale market gardens and find new income opportunities. We are also providing people with safe clean water, sanitation and hygiene education and traning them in skills that will earn them a living.

Too many young people are pushed out of formal education each year in Vanuatu. But with Oxfam’s support, a network of small rural training centres is giving them new opportunities to learn and build a brighter future for themselves and their families.

Ni-Vanuatu youth have to navigate hard realities – few jobs, a low-wage economy for unskilled jobs, and a high cost of urban living. Limited schooling opportunities mean that most young people don’t finish secondary school – only 32% even enrol. After leaving school, most have only two options. They can return to the family farm, or move to urban areas looking for work – areas where 35% of people are unemployed.

Oxfam works through partnerships with local organisations on the ground, because who knows the community better than the ones living in it?

We’ve partnered with YCV to help them grow and develop their organisation. More young women and men will be able to thrive as employees and entrepreneurs, and engage with issues that are important to them. Most of YCV’s staff have come through the programme themselves. This means they know the challenges these young people face, and the life-changing difference YCV can make. Take a look at the stories of some of YCV’s graduates.

Vanuatu’s young people are the country’s biggest resource – with the right opportunities, these young people will be the leaders of Vanuatu’s social and economic development.

Farm Support Association (FSA) is helping to raise the standard and appeal of farming and increase incomes by empowering farmers to adopt effective and sustainable practices. They help farmers produce higher volumes of quality produce, with a focus on local varieties.

FSA supports the development of small income generating opportunities. They provide agricultural extension to women farmers on five islands, and to young people interested in farming as a business.

Women are producing vegetable and off-season pineapples, and raising chickens and pigs, and selling their produce to neighbouring communities and in markets. As well as reinvesting into their farming businesses, many use the income to pay for their children’s education.

FSA also teach farmers how to make animal feeds, saving them money that can be invested into developing their business

Oxfam is helping FSA develop into a robust organisation. This will strengthen the long-term impact of FSA’s work. We are doing this by sharing expertise and resources, including financial management systems, developing publications and hosting skills workshops.

FSA has reached over 300 rural farmers. The first cohort of young people has graduated from the three-year Young Farmers’ Development Course.

Oxfam is helping the agricultural sector transition from subsistence to small-scale market-oriented farming.

Thousands of young Ni-Vanuatu now have practical skills that they can use to support themselves and their families for the long term. 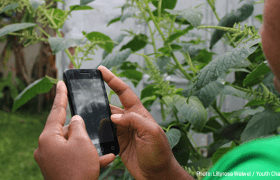 It is a familiar conundrum around the world during the coronavirus pandemic – students crammed into home offices or at the kitchen table, adapting to the strange new reality of learning online and communicating with classmates and teachers solely through a screen.For many young students in Vanuatu, getting an education online is an unfeasible or unaffordable luxury. But with the help of generous donors, Upskill People and Digicel, and supported by Oxfam, Youth Challenge Vanuatu (YCV) is helping young people in the island country to take their learning online. The pilot programme, launched in May, provided students with free mobile data, … Read More 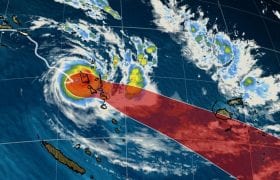 Oxfam teams in the Pacific are working with partner agencies and governments in Vanuatu and Solomon Islands, to plan a response to Tropical Cyclone Harold.The Category 5 cyclone, made landfall in Santo and Malo islands in Vanuatu’s northern Sanma Province this morning local time and the slow-moving storm is now moving into the Penama and Malampa Provinces. The three provinces have a population of 127,000 people, many of whom are considered high risk as their very livelihoods depend on their food and vegetable gardens. Heavy rainfall and gale force winds are expected to cause damages to homes, buildings and flooding to … Read More

Up to 130,000 in path of tropical cyclone Harold as storm approaches Vanuatu capital Oxfam is ready to respond to tropical cyclone Harold, which is expected to hit Vanuatu in the next 24 hours. The storm’s current path suggests it will pass through the Vanuatu island group, potentially affecting the capital Port Vila, as a powerful Category 5 storm. Hundreds of thousands of vulnerable islanders lie in its path. TC Harold has already left a trail of damage in the Solomon Islands. Reports are coming in of heavy flooding and fallen trees damaging buildings, with most concern … Read More

UPDATE: 12:00pm 09/05/2017 An update has been sent out from Oxfam’s regional office in Vanuatu. The worst affected people are those in the Torba province. Oxfam in Vanuatu have decided to partner with the Vanuatu Red Cross and distribute Oxfams’ hygiene kits and seeds to get crops going again. A response focusing on the Shefa province could go ahead. If required, Oxfam could be able to provide or assist with the following: Provision of clean water, hygiene kits, hygiene educatoin workshops and assistance with the rebuilding of water sources Cash vouchers to ensure people have a means of getting food … Read More 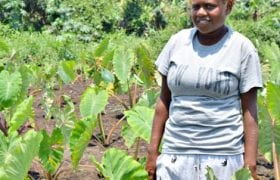 It’s not uncommon for children in Vanuatu to stop attending school at 10 years old – there are not enough secondary school places due to government budget constraints, and many families can’t afford the school fees. At whatever age these young people leave school, their job prospects are often very limited. Oxfam has been partnering with Rural Training Centres (RTCs) and the Farm Support Association (FSA) in Vanuatu to give young people a chance at learning a variety of skills to make them employable, equip them to start their own businesses, and give them a good shot at earning an … Read More

Oxfam is closely monitoring after a cyclone warning was issued for Vanuatu, as numerous provinces brace for damaging gale-force winds and flooding … Read More