For a more just, inclusive and sustainable world.

Menu
Home> What we do> Where we work> Bangladesh

Almost half of Bangladesh lives on less than one dollar per day.

Straddling in the fertile Ganges-Brahmaputra-Meghna (GBM) basin, Bangladesh is one of the world’s most densely populated countries, with around 160 million people living in a land area of about 147,570 square kilometers. The landmass – largely a deltaic formation – coupled with climate change, makes it subject to catastrophic natural disasters. In particular, Bangladesh’s 600km coastline is one of the most disaster-prone regions in the world. On top of this, close to a million Rohingya people have fled violence in Myanmar to seek refuge across the border in Bangladesh. This unprecedented number of refugees, of whom more than half are children, has caused a large-scale humanitarian crisis. Oxfam is responding, but we need your help.

More than 700,000 Rohingya refugees have arrived from Myanmar’s Rakhine State in Bangladesh’s south-eastern districts since August 2017, and hundreds more are arriving every week. They join hundreds of thousands who are already living in refugee camps and with local communities. More than half of them are women and girls, 60 percent are children under 18. Many have arrived injured and deeply traumatized by their experiences, with just the clothes on their backs. They need food, clean water and shelter to survive, but above all they need to feel safe. People are living in makeshift tents in hugely overcrowded settlements.

Conditions in the camps are woefully inadequate and unhealthy, with overflowing latrines and contaminated water. They’re largely unlit and dangerous at night. Women, girls and children are particularly vulnerable to abuse, exploitation and trafficking. We are currently focusing on providing water and sanitation and adapting to better deal with the crowded conditions and sheer numbers of people. So far, we have reached at least 266,000 people. You can help us scale up our response to 300,000.

By supporting Oxfam you will: 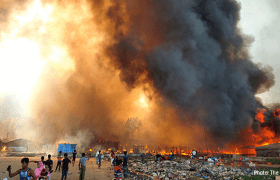 Bangladesh, Media Releases, Media Releases, News & Media, Rohingya
Key FactsMassive fires swept through the Cox’s Bazar Refugee Camps on March 22, 2021.The damage is significant and still being assessed.Preliminary reports say that 10,000 families (approximately 45,000 persons) were displaced.At least 15 refugees were killed. Hundreds of others were injured.Four camps have extensive damage. Thousands of shelters, offices, and other facilities were burned.Oxfam’s Rapid Response Team has been deployed and worked through the night providing water to help extinguish the fire. The team also provided drinking water, hygiene kits, and emergency latrines.Fencing around the camps impeded firefighting machinery and refugees attempts to escape the fire. • Humanitarians are urgently … Read More 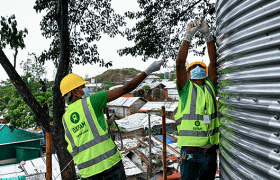 Oxfam responds to devastation in the wake of Cyclone Amphan

Bangladesh, Media Releases, Media Releases, News & Media
Cyclone Amphan has left a trail of devastation throughout north-east India and the Bangladesh coast, with over 80 deaths reported so far, destroying homes, embankments and crops, and compounding the suffering in many communities already hit by coronavirus and the impact of the lockdown. The low-lying coastal communities in both countries are amongst the worst hit by the strongest ever cyclone recorded over the Bay of Bengal, which swept through the region late Thursday.  Oxfam and its partners are helping provide food, shelter and clean water to communities and assessing the further support needed in many others.  Dipankar Datta, Country Director, Oxfam in Bangladesh said:  “The situation in … Read More

Bangladesh, Media Releases, Media Releases, News & Media
Cyclone Amphan, the strongest ever cyclone recorded over the Bay of Bengal, is expected to hit north-east India and Bangladesh tomorrow (Wednesday, 20 May) threatening millions of people in vulnerable communities already affected by Covid-19 outbreaks and lockdown.    Millions of people are being evacuated in India and 12,000 shelters have been prepared in Bangladesh to house nearly five million people in the expected path of the cyclone.  Camps in Cox’s Bazar in Bangladesh, home to almost a million Rohingya refugees, are also likely to be hit and are especially vulnerable given the cramped conditions and an increasing number of coronavirus cases.  https://www.oxfam.org.nz/wp-content/uploads/2020/05/Twitter-video1_1.mp4Oxfam, working with … Read More 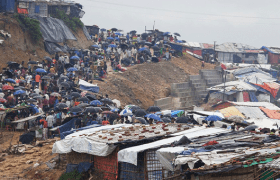 Bangladesh, Media Releases, Media Releases, News & Media
Almost one million Rohingya people in the world’s largest refugee camp are facing the added threat of a cyclone as the first cases of Covid-19 are confirmed, Oxfam warned today. The cyclone, which looks likely to form off the coast over the weekend, could bring further suffering and destruction to the camps on top of a potentially devastating health crisis. Dipankar Datta, Oxfam Bangladesh Country Director said: “Our worst fears have been confirmed as the virus hits the overcrowded camps where many people are suffering from pre-existing health conditions. “With 40,000 people crammed per square kilometre maintaining social distance is impossible … Read More 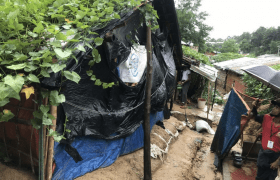 Bangladesh, Bangladesh, Media Releases, monsoon, Rohingya, Rohingya refugees
Oxfam is warning that thousands of Rohingya refugees in Bangladesh are in danger after almost a month’s worth of rain fell in just a week. Cox’s Bazar is home to the world’s largest refugee camp where more than 900,000 refugees live in fragile homes built from bamboo and tarpaulin. Elizabeth Hallinan, Oxfam’s advocacy manager in Cox’s Bazar, said: “Days of heavy rain and landslides have left homes teetering precariously on the brink of steep ravines. Roads have turned into rivers and streams run down the steep hillsides between people’s houses. “Oxfam is rushing to reinforce and repair vital infrastructures like toilets and handpumps … Read More 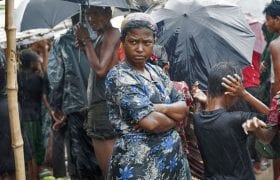 aid, Bangladesh, crisis, Humanitaria, Media Releases, Media Releases, refugee, Rohingya
Oxfam is working with supporters, local organisations and refugees to tailor its humanitarian response to more effectively support women and girls. This includes installing solar-powered lights along pathways, distributing portable solar lamps, running women’s groups to discuss issues like safety and early marriage, community work to tackle violence against women, and working with refugees to design new toilet facilities with features like lockable doors, shelves to keep clothes out of the mud, and screens to afford privacy. Rohingya women living in Bangladesh are developing health problems, missing out on aid and are at greater risk of abuse due to unsafe and unsuitable … Read More
Menu
Facebook
Twitter
Instagram
Youtube
Linkedin